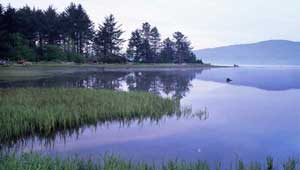 Located where the Kilchis River joins Tillamook Bay, this point is named for a respected leader of the Tillamook people, which thrived for thousands of years on the bay’s abundant resources. Kilchis Point was so important to native people that in 1805 explorers Lewis and Clark heard stories about its resources, although they traveled through many miles to the north. Later Joe Champion, an early white settler, made his home in the hollowed-out stump adjacent to the Tillamook village on Kilchis Point. Today, the land retains much of its pristine character—the bay provides a rich habitat for endangered salmon, and bald eagles nest in the forests of old growth spruce. The beauty of this coastal area made it a prime target for development, but a generous private donation allowed TPL to purchase the property and transfer it to the Tillamook Pioneer Museum. The land will be managed as an educational, and cultural resource while preserving the point’s fragile ecology.