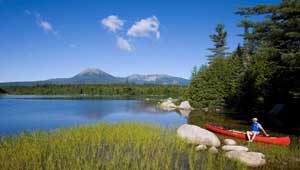 Pristine and scenic Katahdin Lake has been coveted by conservationists for generations. Since 1921, when Maine Governor Percival Baxter identified the Lake as a critical piece of the Park that bears his name, this parcel of old growth forests and dramatic vistas had eluded all conservation efforts.

In December 2006, nearly 37 years after Baxter’s death, Katahdin Lake finally became part of Baxter State Park. TPL helped the Baxter Park Authority and Maine’s Department of Conservation fulfill Baxter’s vision by negotiating a complex transaction and raising $14 million to protect the lake and the surrounding landscape. The more than 1000 donors included noted landscape artists, who contributed proceeds from the sale of paintings depicting the breathtaking view of Mount Katahdin from the shores of the lake. The lake will be accessible to anglers, paddlers, hikers, artists, and nature lovers.