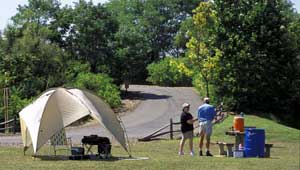 In April of 2001, Voorhees Township, acquired a 49-acre former asphalt plant with plans to turn the majority of the property into an expansive "great lawn" for public use. The site, which also contains the headwaters of the Cooper River and a 12-acre hardwood swamp, had been designated as a conservation priority by the township since 1998. In the spring of 2002, John Connolly Park—named after a dedicated member of the Voorhees civic community—was opened to the public. In addition to the new lawn, the park features an enclosed gazebo, a children's play area, a dog run, and a jogging track. This project was TPL's first acquisition for Camden County using its Open Space Trust Fund.