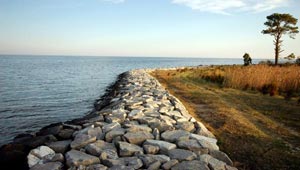 In 1992, TPL protected 535 acres known as Jacob’s Farm as an addition to Point Lookout State Park at the mouth of the Potomac River. This property has tremendous natural resources, including wetlands, oyster beds, and woodlands. Point Lookout State Park has numerous recreational opportunities including swimming, fishing, boating, and camping. And Point Lookout has a rich history. Captain John Smith first explored it in 1612. In 1862 during the American Civil War, much of the Point was transformed into a Union prisoner of war camp that held 50,000 Confederate captives in tents during the course of the war.