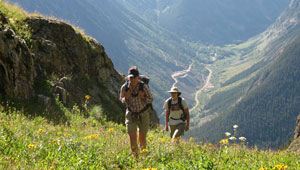 Gazing at the aspen- and spruce-covered mountainsides, most visitors to the San Juan Mountains just north of Silverton believe that they are looking at public lands. But TPL’s protection in August 2011 of the Jackson Claims, 225 acres of high-country mining claims in the San Juans, speaks to the area’s rich past and uncertain future.

Beginning in the late 1800s, prospectors were permitted to claim potentially mineral-rich lands held by the government. These claims were eventually privatized, leaving behind a legacy of fragmented public and private holdings—the latter an attractive target for developers.

In the 1990s, Colorado’s population surged, bringing with it a renewed interest in subdividing and developing the now-idle mining parcels, many of which are surrounded by federally protected land. By purchasing the 225-acre property in the Alpine Loop area, TPL removed the threat of development, preserving precious wildlife habitat, recreation access, and the region’s rugged natural beauty.