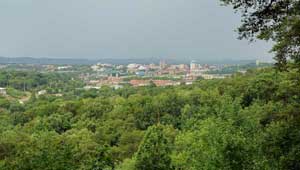 The Chattanooga area figured prominently in the history of the American South in the 1800’s. The path of the Trail of Tears—the tragic 1838 removal of Cherokee Indians from Northwest Georgia and Southeast Tennessee—originated in nearby New Echota, Georgia, and threaded through Chattanooga and the surrounding area. Then, in the fall of 1863, several significant Civil War battles were fought in and around Chattanooga, Lookout Mountain, and nearby. Today these areas serve as important reminders of the lessons learned and the sacrifices made as the young United States struggled to define itself.

The Trust for Public Land helps the National Park Service preserve Chickamauga-Chattanooga National Military Park and acquire inholdings and other land within the federally-defined park boundary. We also work with the City of Chattanooga to preserve and interpret both Civil War and Trail of Tears sites along the South Chickamauga Creek Greenway. Other partners, like the Civil War Preservation Trust, play a key role in supporting our Heritage Lands work on Missionary Ridge.