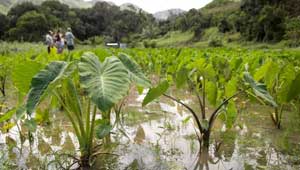 The remote northern end of the island of Moloka‘i offers a modern view of an ancient culture. Local residents began restoring lo‘i (terraces) and ‘auwai (canals) in 1997, and reintroduced taro to Hālawa Valley, which had been grown by the very same ʻauwai system for several hundred years up until the middle of this century.

In 1998 and 1999 The Trust for Public Land, working with local community leaders and the Maui Open Space Trust, acquired key parcels of land with private donor funding, and granted the parcels to the land trust for community stewardship. The Hālawa Valley Land Trust now owns the property, which is used as an outdoor classroom to connect people to the valley for education, recreation, growing kalo (a staple food of Native Hawaiians), and connection to a rich cultural history.