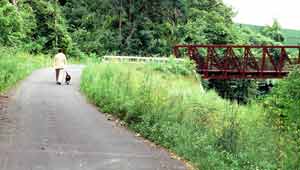 After a decade and a half effort, in 2004, The Trust for Public Land and partners completed the Gwynns Falls Trail, a 14-mile hiking and biking trail through the city of Baltimore. The trail follows the Gwynns Falls stream valley from Leakin Park near historic Franklintown, through 2,000 acres of parkland, more than 30 neighborhoods, and numerous historic and cultural sites before arriving at the Inner Harbor and the Middle Branch of the Patapsco River. The route highlights Baltimore’s cultural heritage by re-opening a portion of a carriage path from the turn of the century and passing eighteenth and nineteenth century mansions, ruins of a mock fort from the 1800’s, a relic water wheel, the site of an old mill race, and a restored pedestrian arch under the oldest continuously operating railroad bridge in the United States.

Find out more about Gwynns Falls Trail at this resource-packed website.