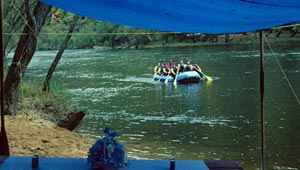 Established in 1988 by the National Park Service, the Gauley River National Recreation Area contains over 11,000 acres of land and 31 miles of the Gauley and Meadow rivers. The rivers cut through breathtaking gorges and valleys, marked by high ridges that fall steeply into canyons and their rivers and streams below, creating one of the most scenic areas in the state. The Gauley and its surroundings provide a unique habitat, characterized by an extremely variegated topography and its microclimates, which is home to a diverse selection of plants and animals. Despite its National Recreation Area status, the Gauley still lacks public river access and other recreation facilities. This can be largely attributed to the fact that the Gauley is a relatively new part of the National Park System. Today, only about 20% of the recreation area’s acreage is federally owned. Working in partnership with the National Park Service from 1987 to 1994, The Trust for Public Land helped protect five properties totaling nearly 1,300 acres as additions to the Gauley National Recreation Area. TPL plans to work with the federal government in further efforts to acquire land for the recreation area.