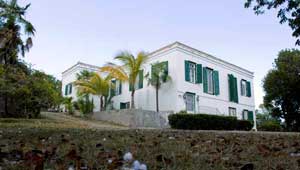 While his face is best known from the USD ten spot, Alexander Hamilton was actually born and raised in the Caribbean. Hamilton grew up on the island of St. Croix, at Estate Grange, the home of his aunt and uncle, James and Ann Lytton. Built in 1753, the home was fully restored by its current owners. Their family acquired the estate in 1928, carefully maintaining the property with an eye to its historical significance as the birthplace and childhood home of one of the nation’s founding fathers.

U.S. Senators Orrin Hatch and Jay Rockefeller, Virgin Islands Governor John deJongh, and Congressional Delegate Donna M. Christensen all support plans to preserve the property and its designation as a National Historic Site. As 2010 drew to a close, a formal research effort was under way to establish preservation grounds. Many believe that Estate Grange promises to become a major heritage tourism attraction like Thomas Jefferson’s home, Monticello, and Mount Vernon, home of George Washington. The Trust for Public Land plans to acquire the property for the National Park Service for designation as a National Historic Site. We are working closely with Virgin Islands and federal government representatives on an acquisition partnership to protect this important property through a combination of local, federal, and private support.