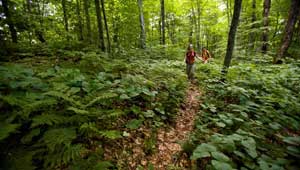 TPL conserved more than 5,700 acres of private forestland, known as Eden Forest, in the towns of Johnson and Eden, Vermont. The property, which borders four miles of the Long Trail State Forest, will continue to be owned and sustainably managed for timber by the Green Crow Corporation. The state holds a conservation easement on Eden Forest, which will permanently protect the land from development, safeguard large landscape connectivity and significant wildlife habitat, and allow permanent public access for recreation.

By conserving one of the largest privately owned parcels in the Northern Green Mountains, TPL connected more than 30,000 acres of conserved forestland with regional and national significance. Eden Forest is a keystone in the Northern Green Mountains Linkage, and was a top priority of Two Countries, One Forest, a cross-border collaborative that identified the Green to Sutton Mountains as one of 5 critically at-risk linkages in the Northern Appalachians. The property is home to a variety of wildlife including black bear, bobcat, gray and red fox, moose, and deer. More than 120 acres of beaver wetlands on Eden Forest provide homes for wood ducks, turtles, many warbler species, and a great blue heron rookery.