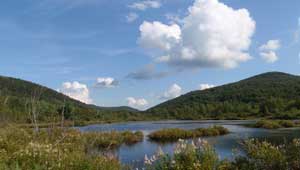 The scenic Deerfield River and its surroundings are a popular recreation destination in Readsboro, attracting kayakers, hunters, fishermen, and wildlife watchers. The conifer and hardwood forest is home to black bear, moose, deer, wild turkey, and other species. The Deerfield, one of the region’s cleanest and coldest rivers, is rich with native and stocked trout and is an Atlantic salmon restoration site. But in recent years, lands that were traditionally open for public use are being subdivided for private residences. ]

In March 2012, we protected 680 acres along the river, which will be added to the Green Mountain National Forest, linking three unconnected tracts and increasing recreational access with new trail linkages and future trailheads. Protecting the land keeps wildlife corridors intact and strengthens the region’s forest industries and growing tourism economy by preserving the rural character of Readsboro.