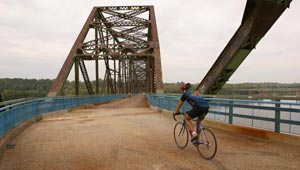 Nearly two centuries ago, Lewis and Clark left for their historic adventure westward from the confluence of the Mississippi and Missouri Rivers north of St. Louis. In advance of celebrating the bicentennial of this journey and the centennial anniversary of the 1904 St. Louis World’s Fair, city and state leaders have made a strong commitment to reinvest in the region, using parks and greenways to exemplify their goals. To better plan and finance local and regional cross-jurisdictional green space initiatives Missouri and Illinois Legislatures authorized the nation’s first bi-state park and recreation districts. The Confluence Greenway, a system of interconnected riverbank parks and trails stretching from the Gateway Arch in St. Louis 40 miles north to the bluffs of the Illinois River, was used as a demonstration of important regional efforts.

In November 2000, voters in the city of St. Louis and four surrounding counties approved a 0.1% sales tax expected to generate nearly $23 million for both local park districts and regional metropolitan projects. From 1997 to November 2000, TPL helped local community leaders with polling, strategy, measure design, and communications. Now that the park district has been created, TPL continues to work with the local communities to help implement their programs and acquire targeted lands.