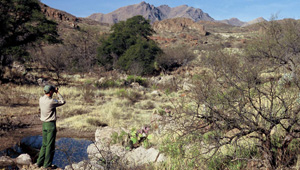 This canyon in the foothills of the Santa Rita Mountains south of Tucson is a nationally renowned birding hot spot and home to several animal species of conservation concern, including the Gila top minnow and Mexican spotted owl. While much land surrounding this property was being subdivided and sold, The Trust for Public Land began working with state agencies to preserve the sensitive habitat, which had once been part of the 20,000 acre Salero Ranch. In December 2004, TPL and Arizona Game and Fish protected more than 2,600 acres for management by Arizona State Parks as part of the adjacent Sonoita Creek State Natural Area. An additional 874 acres were added in 2006. The project was made possible by state and federal wildlife conservation funds.