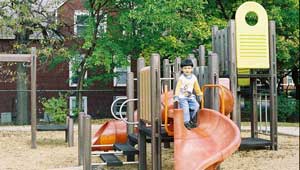 In the early twentieth century, the town of Cicero, just outside of Chicago, was the second largest manufacturing center in the state and experienced rapid development. In recent years, the town has experienced another surge in growth, with population increasing 26% since 1990. To keep up with this growth, Cicero’s Clyde Park District is on the lookout for ways to create new parks and enlarge old ones—like the half-acre North Clyde Park, created in 1932. In 2005, when the district learned that the home next to the park was for sale, they partnered with The Trust for Public Land to move quickly and secure the property, giving the town time to obtain a grant to purchase the lot, expand the park, and create more green space in a densely populated neighborhood.