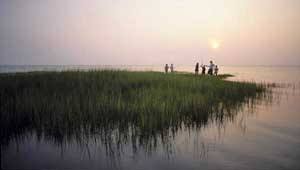 Up to 20 miles wide, and stretching nearly 200 miles between Virginia and Maryland, the Chesapeake Bay is the nation’s largest estuary and a vital natural and human resource. But over the last decades, growth and development in the bay’s watershed have polluted its rivers and streams and threatened its ecology. In 2000, Maryland, Virginia, and Pennsylvania signed the Chesapeake 2000 agreement, pledging to protect 20 percent of the bay’s watershed by 2010 as a way to improve water quality and ecosystem health. In November 2002, Virginia voters made a big step toward that goal by approving a $119 million bond to protect parks and open space—one of the largest conservation measures nationwide that year. Of the total, $36.5 million is earmarked specifically for land conservation. TPL’s Conservation Finance Program joined other conservation groups that supported the ballot measure.