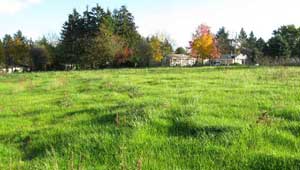 Cherry Park, a beautiful and popular local park in a densely populated, park-poor suburb of the City of Portland was until only a few years ago, an old quarry site. Portland Parks and Metro asked TPL to help them acquire the property, which involved splitting the project into two phases, and buying and holding the property for two years to overcome contract problems.

The first phase covered 4.5 acres of land next to an existing city park where the quarry had already been filled and reclaimed. With this land transferred to Portland Parks, TPL bought the remaining 6.5 acres of land, still in the process of being restored from open quarry to parkland.
Now the neighborhood has a substantial park, with both natural areas and baseball fields, easily accessible from the main roads and nearby schools.