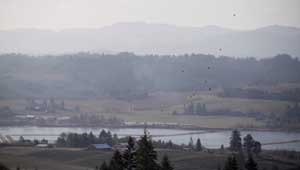 Straddling the top of Chehalem Ridge, just south of the town of Forest Grove and within an easy commute to Portland, the property has panoramic views of surrounding farmland and five Cascade mountain peaks: Rainier, St. Helens, Adams, Hood and Jefferson. Not surprisingly, its long-time owners, Stimson Lumber Co., seriously considered giving the land over to housing, and even drew up plans for development. But they also recognized the land’s importance as a watershed—no fewer than 7 streams rise on the ridge—and when the housing market slowed, they agreed to talk to The Trust for Public Land about a conservation sale.

In September 2010, TPL transferred ownership of Chehalem Ridge to Metro. Now the property is being restored as the new Chehalem Ridge Natural Area: a scenic and recreational resource for the region that will protect water quality and wildlife habitat in the Tualatin River Basin and give the region’s growing population an outstanding natural park. At 1,143 acres, it is by far the largest piece of new land acquired using money from two voter-approved bond measures, which have dedicated over $300 million to acquiring natural land in the Portland region since 1998.