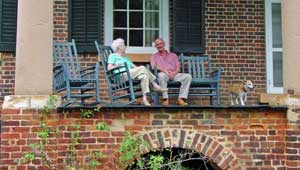 The first time Belle Banks saw Cedar Grove was shortly after her husband Dick inherited the antebellum house from his mother. What she found was discouraging. While solidly built from bricks made on-site, the house had no indoor plumbing or electricity, and many windowpanes were missing. No way, Belle told her husband, there was no way she would live there without indoor plumbing. Over the next few years, however, room by room, the couple turned the enormous house into a home. In its heyday, Cedar Grove sat on 3,000 acres of land and was one of the wealthiest plantations in Mecklenburg County. Assembled between 1799 and 1840, Cedar Grove has long been regarded by architectural historians as one of the finest examples of antebellum Greek Revival architecture in the state. TPL protected the land around the house and across the road along McDowell Creek as part of the Mountain Island Lake Initiative.