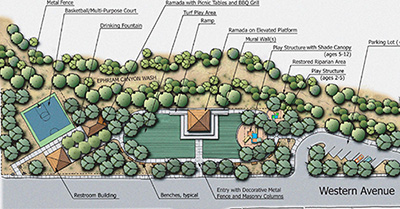 Nogales takes its name from the Spanish word for the walnut trees which once grew abundantly in the mountains around the city—but today, many residents have little access to nature. The city asked The Trust for Public Land to help build a 20-acre park in a park-poor area of the city on Western Avenue. We engaged community stakeholders and potential park users in the participatory design process, a series of public workshops to determine what park amenities and features the neighborhood most wanted. During this process, we retained a highly regarded landscape architect firm (McGann & Associates, of Tucson) to work with community input and develop a master plan for the park's construction.

With the support of private donors, we secured a seed investment for the new park. The city followed up with approval of nearly $900,000 from various sources—including federal funds—to build Camp Little Park. Opened in 2008, the park features a playground, basketball court, nature trail, and picnic ramadas.