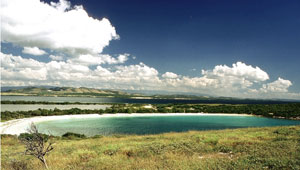 In 1999, we protected 1,445 acres of sensitive coastal habitat for addition to the Cabo Rojo National Wildlife Refuge, more than doubling the size of the refuge. Situated on the southwestern tip of Puerto Rico, the Cabo Rojo Salt Flat property has been documented as the most important point of convergence for migratory shorebirds in Puerto Rico and the U.S. Virgin Islands. Each year, more than 40,000 shorebirds use the Cabo Rojo Salt Flats during their migration between North and South America. In addition, several species of sea turtles nest on the beaches and manatees feed on seagrass beds offshore.

The salt flats, which include two large and shallow lagoons, are historically known as the Fraternidad and Candelaria Farms, and are separated from the Caribbean Sea by narrow strips of dry coastal forest, mangroves and sandy dunes. A portion of the lagoons were altered over a century ago to create evaporating basins for commercial salt production. The salt processing facility, which regulates the flow of water into the lagoons, is believed to enhance the quality of the feeding habitat for the birds that frequent the property.