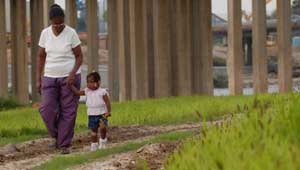 In the fall of 2007, The Trust for Public Land completed a series of conservation acquisitions for the Houston Parks Board, establishing a new park with a linear hike-and-bike trail along Brays Bayou in the East End. This area is a mix of ageing residential, commercial, and industrial structures and has been underserved by parks for decades. The park provides an important greenway that links heavily-used, 108-acre Mason Park and the Houston Ship Channel. The properties acquired for the greenway are all within the historic neighborhood of Harrisburg. Formerly a town in its own right, Harrisburg briefly served as the state capital of Texas. It was also the community from which Houston was first established.