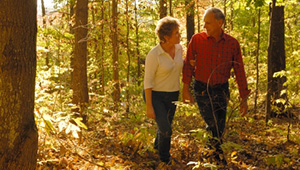 In the nineteenth century, Asheville’s boys and girls went to separate schools on opposite sides of town. Local storytellers say that mountain trails circling the city offered quiet places for young couples to meet. Thus Beaucatcher Mountain got its name. The city has had the idea of creating an overlook park for years. In 1920, John Nolan, an early city planner, authored the first city plan for Asheville-delineating a circle of parks surrounding Asheville and major city parks in every neighborhood. The key component of the park system was an expansive overlook park along Beaucatcher Mountain, and open space connecting it to downtown Asheville and the surrounding neighborhoods. Eighty-seven years later, The Trust for Public Land is helping to make it happen, starting with the acquisition of thirty acres of woodland covering the slope of the mountain, and organizing a successful funding plan that shares the financial responsibility among five partners: TPL, the State of North Carolina (Parks & Recreation Trust Fund), private donors, the City of Asheville, and Buncombe County.