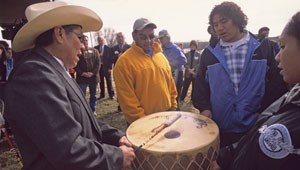 In January, 1863, U.S. volunteer soldiers attacked the winter camp of the Northwestern Band of Shoshone Nation, slaughtering as many as 350 men, women, and children in what is believed to be the largest massacre of Native American people in U.S. history. Surviving members of the band struggled for years to keep their culture intact without a land base or federal recognition as a tribe, which finally occurred in 1980. In 2003, 140 years after the massacre, the band’s sense of its history and identity advanced significantly when TPL purchased 19 acres of the massacre site, along with a seven-acre buffer, and presented it to the tribe. The land had been used for years as cattle pasture. The American West Heritage Center, in Wellsville, Utah, worked with TPL to raise funds for the land’s return, which was celebrated at a gathering of band members and supporters.