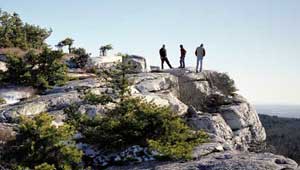 When a developer announced plans for a golf course and 349 luxury homes along upstate New York’s Shawangunk Ridge, “Save the Ridge” signs appeared as far away as New York City. With waterfalls, lakes, forested ridges, and rocky outcrops, the area south of the Catskills affectionately known as “the Gunks” has been popular with nature lovers and rock climbers since the 19th century. Tens of thousands of acres have been protected here, and conservationists and residents worried that development of the 2,500-acre Awosting Reserve would spoil views and disrupt the area’s wild ambience. Along with our partner, the Open Space Institute, we acquired the land in 2006 for addition to adjacent Minnewaska State Park Preserve.