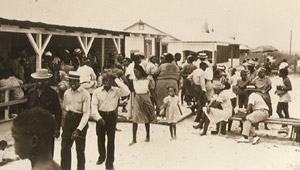 Located on Amelia Island, north of Jacksonville, American Beach was founded in the early 1930s by Abraham Lincoln Lewis, president of the Afro American Insurance Company, for his African-American workers. As one of the few Florida beaches open to African-Americans during segregation, the community continued to attract throngs of visitors through the 1950s. More recently, development encroached on the town, and Lewis’ great-granddaughter, MaVynee Betsch—a brilliant eccentric known locally as the “Beach Lady”—helped marshal supporters and partners to help preserve it. In 2004, we purchased a stretch of the beachfront to be protected as public land. The parcels hold the historic Evans’ Rendezvous nightclub, and Nassau County recently received a grant from the National Park Service to document the structure’s condition.