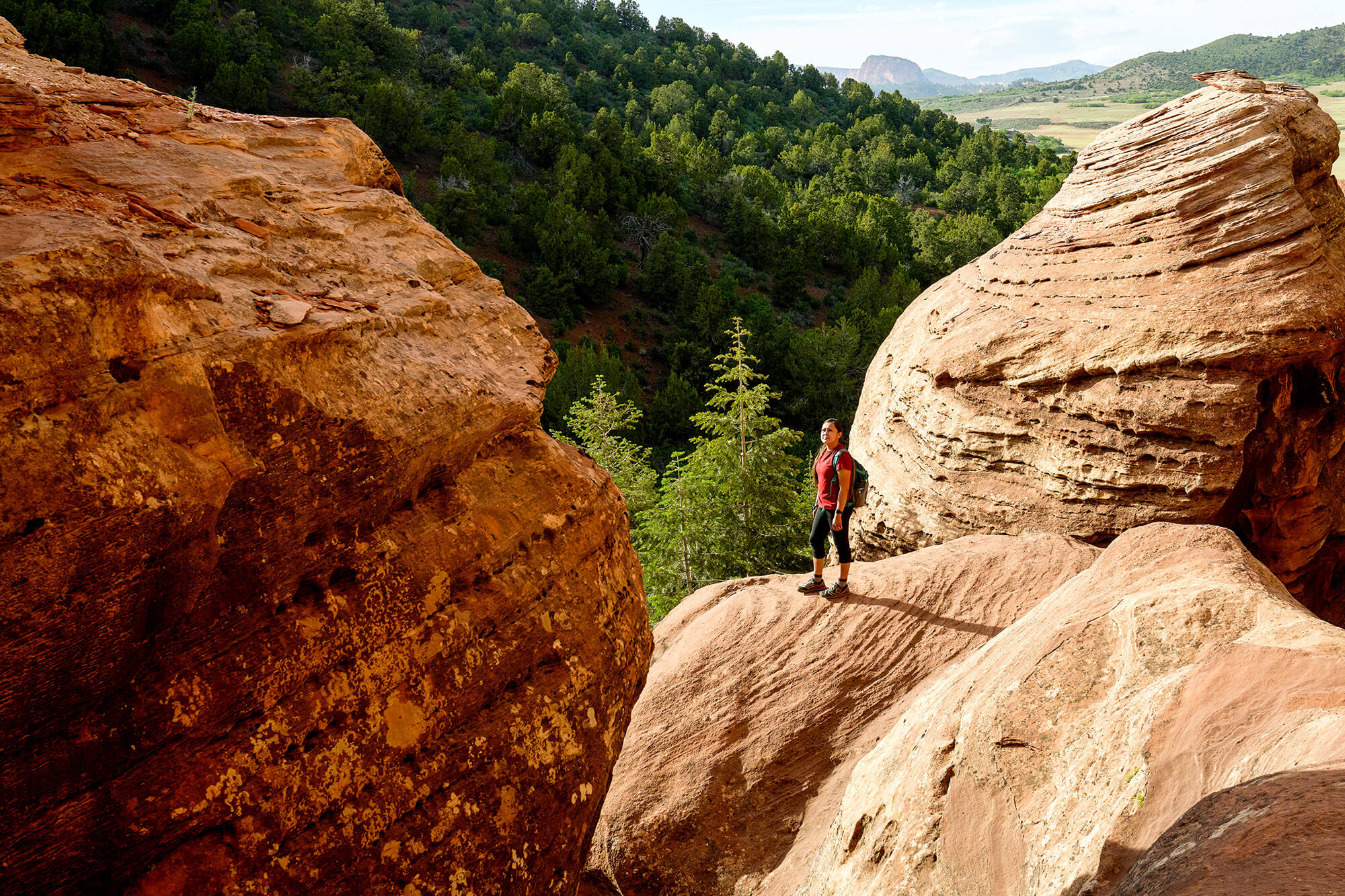 What is now Zion National Park was named for the biblical city of David by Mormon settlers in the 1860s, a tribute to the awe-inspiring landscape. This spectacular collection of massive sandstone canyons and cliffs topped by templelike domes and buttes also reflects the connotations of the word zion: highest point, holy place, utopia, refuge. The park’s vertiginous topography, carved from 2,000-footthick layers of Navajo sandstone by the Virgin River, has provided a refuge in the desert for humans as far back as 9,000 BCE and shelters Utah’s greatest diversity of wild plants and animals.

Today, this protected land is threatened: Zion National Park’s 229 square miles of plateaus, domes, and canyons host 5 million visitors a year, more than either Yellowstone or the Grand Canyon—it is the second most visited national park in the U.S. Its very popularity makes Zion vulnerable to development from inside and outside park boundaries, not to mention complicating access to its iconic trails.

To grasp why Zion is vulnerable we must understand its unique history. Utah’s oldest national park was originally established as Mukuntuweap National Monument by President Taft in 1909 (the name is thought to be Paiute for “straight canyon”). In 1919, Congress enlarged the national monument and renamed it Zion National Park. In 1956, the neighboring Zion National Monument was appended to it, enlarging the park yet again. That redrawing of boundaries created a national park with an unusually high number of inholdings, chunks of private land islanded within the official boundaries, including more than 30 private parcels totaling nearly 3,500 acres.

As southern Utah’s population has exploded, both inholdings and private land around the park have become valuable. St. George, the largest nearby town, was home to around 5,000 people in the 1950s; its population is over 95,000 today. That growth, plus an uptick in visitors, has created conflicts with access to the park from outside and development from inside.

“I love knowing that there are people who care about Zion enough to put up a lot of resources to protect it.” –Cassity Bromley, head of resource management and research at Zion National Park

This is where Trust for Public Land comes in, using its real estate savvy and old-fashioned persistence to help keep this very special national park intact biologically and accessible to millions of visitors. It does so by purchasing inholdings within park boundaries and conserving land adjacent to the park to enhance public access and limit incompatible development.

The process involves patience and persistence, developing relationships with landowners, cultivating trust, working with willing sellers, engaging in due diligence—including environmental surveys—to make sure each property is free of environmental issues, and having funding available for the purchase and transfer of land.

“The key thing for me is having a partner we can work with when opportunities come up. I love knowing that there are people who care about Zion enough to put up a lot of resources to protect it.” In other words, people (and organizations) who are helping keep Zion the refuge it has always been—for humans and its unique wildlife and plants. Scroll down to glimpse some of Zion’s most spectacular and iconic places:

Securing public access to the Zion Narrows Trail may be TPL’s most dramatic project. “The Narrows Trail is one of the top ten trails in the country,” says Greg Hiner, Colorado and Southwest director of land protection at TPL. “It’s on people’s bucket lists.” The 16-mile-long walkwade route threads the upper canyon of the Virgin River, a winding slot canyon where shadowy sandstone walls narrow to a few arm spans apart in places, yet rise to over 2,600 feet high. But there’s a hitch: the canyon and the trail both begin outside the park; to get to them, you have to cross private land whose owners could have legally closed off trail access at any time. 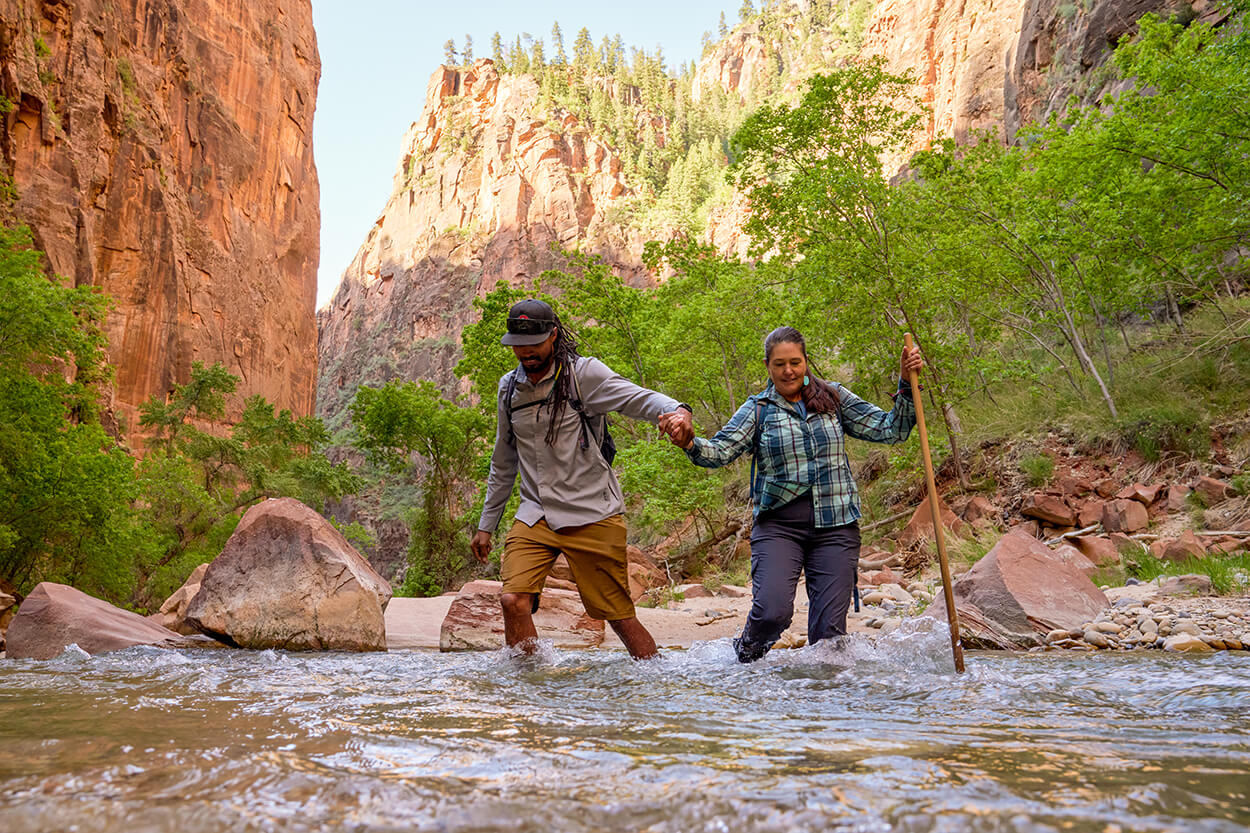 Trust for Public Land began working on securing access to this iconic trail more than a decade ago, first negotiating with Chamberlain Ranch for access to the trailhead, then with another landowner in Simon Gulch, where the canyon (and the trail) winds from public to private land and back again. Success took years and persistence. “The project died, came back, died, and finally came together,” says Hiner. Trust for Public Land also secured access in Orderville Gulch, a side route into the Narrows. “It’s the greatest feeling when you secure keystone pieces like these,” Hiner says. 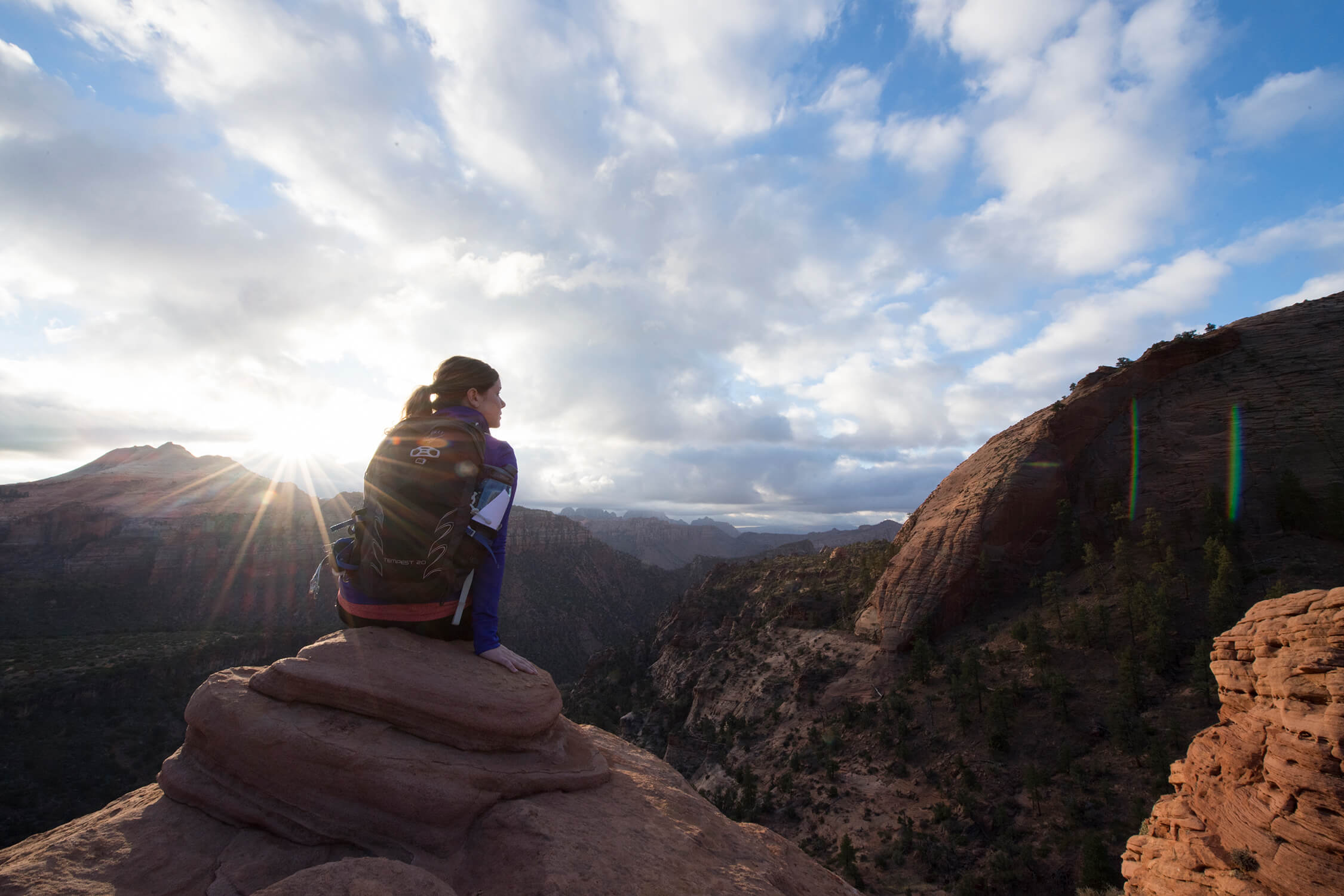 Named for its resemblance to a massive temple dome, Tabernacle Dome rises from the plateau above the canyon of Left Fork, a tributary of the Virgin River. Trust for Public Land acquired two inholdings at the base of this iconic landmark, with a spectacular view of the park’s backcountry; another nearby inholding now holds a mega-mansion. “A small inholding that is developed can have outsized impacts on the surrounding area in terms of increased traffic and infrastructure development, fragmenting the habitat,” notes Bromley. 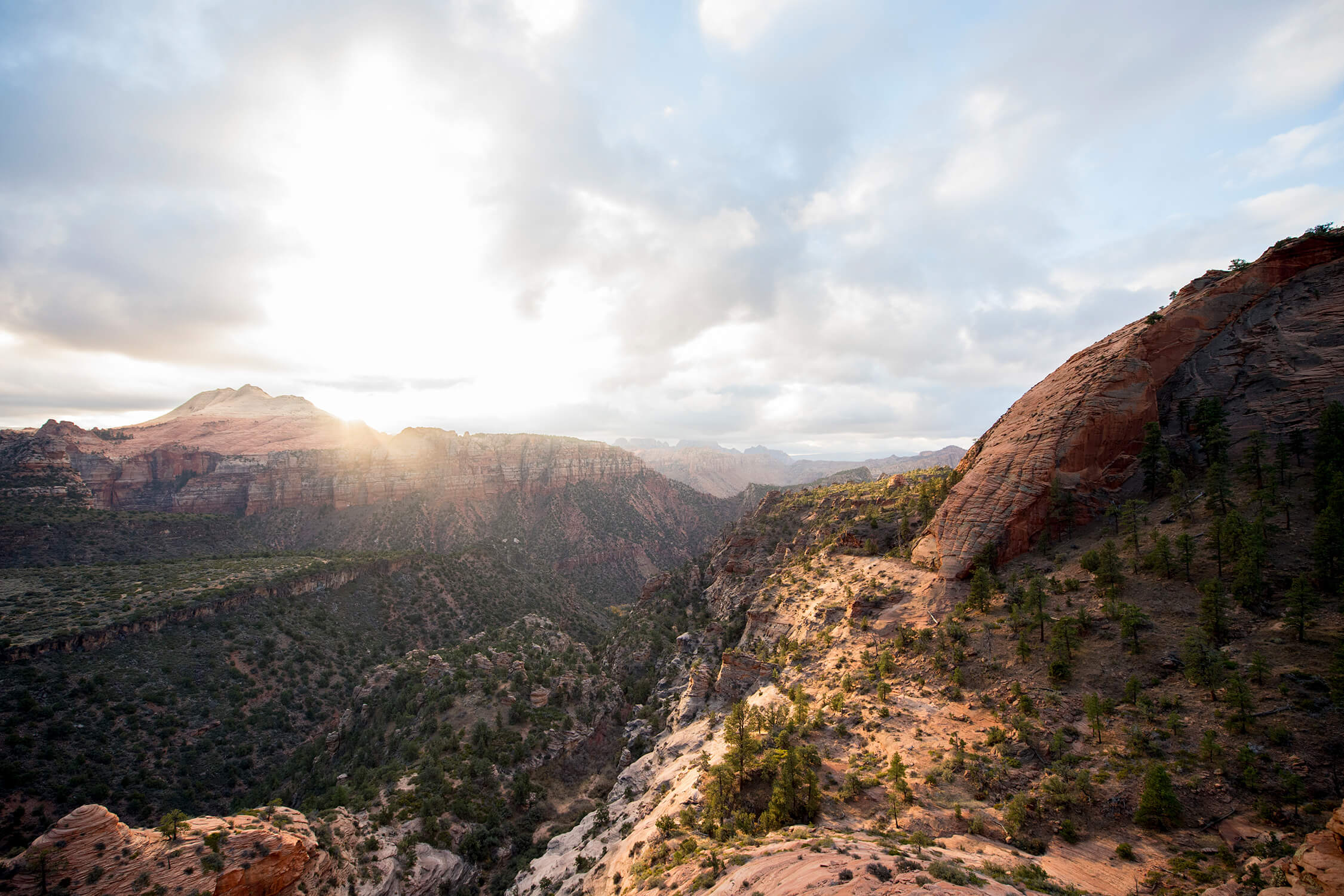 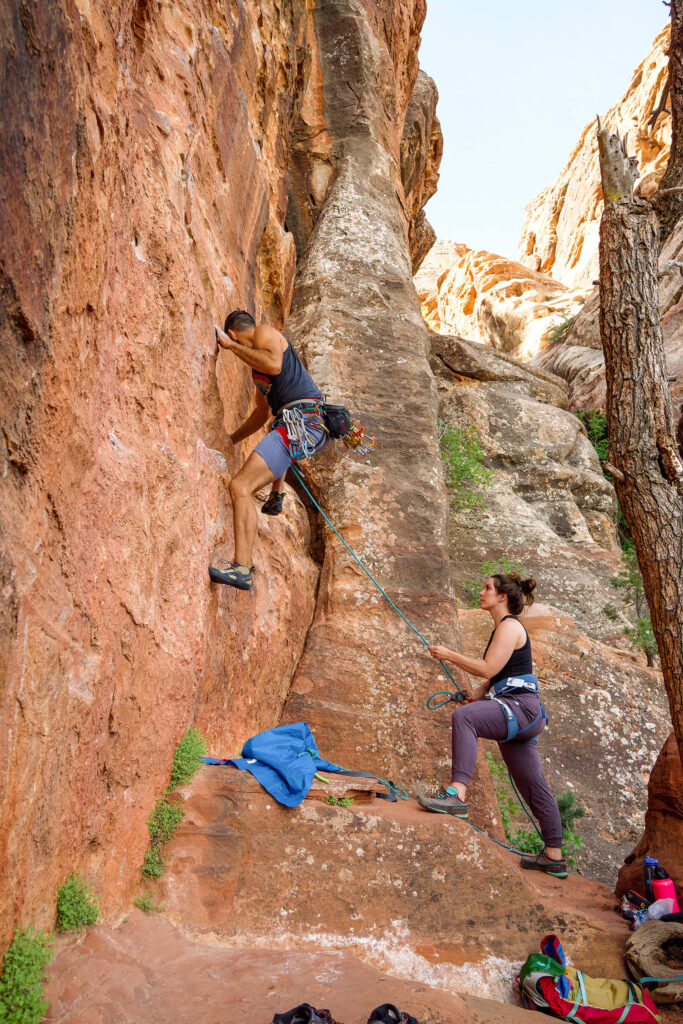 Trust for Public Land recently acquired a 50-acre, roughly triangular inholding that borders the park boundary along Kolob Terrace Road at the base of Lamb’s Knoll, a sandstone butte eroded into slots and hoodoos that is popular with rock climbers. Protecting this property ensures development will not obscure this entrance to the park’s backcountry. Trust for Public Land plans to convey Lamb’s Knoll to the National Park Service in March. 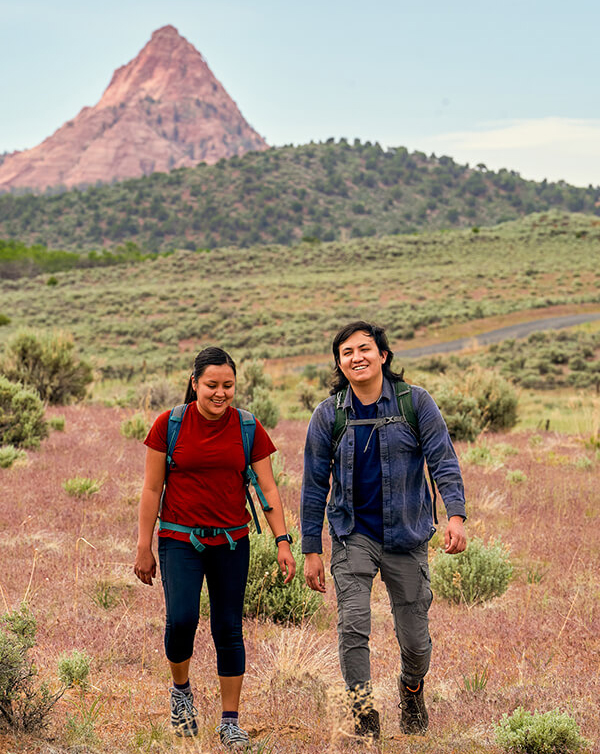 Firepit Knoll, a rare volcanic feature in Zion, is a cinder cone inside the Zion Wilderness. With support from partners including the National Park Foundation, TPL acquired a 35-acre inholding bordering both the knoll and the wilderness boundary, in an area clearly visible from the popular Hop Valley Trail.

Support our work in Utah.

Susan J. Tweit is an award-winning writer and plant ecologist. Her 13 books include the award-winning memoir Bless the Birds: Living with Love in a Time of Dying, hailed by reviewers as “courageous” and “heart-opening.” She lives in and writes from the sagebrush sea in the American West.