Street murals representing the community’s heritage are an important part of our Westwood Via Verde project, which is adding parks, bike lanes, tree canopy, and art to Denver’s Westwood neighborhood.

A pair of giant koi fish—one red, the other blue—swim across the intersection outside Castro Elementary School in Denver, Colorado. Nearby, at Munroe Elementary School, a huge phoenix and dragon, painted in brilliant oranges, blues, and reds, seem to square off at another street intersection.

These are two of the street murals that have recently bloomed in the city’s Westwood neighborhood. They are all part of an ambitious project called Westwood Via Verde, which in the coming months and years will add parks, bike lanes, tree canopy, and art to the community. 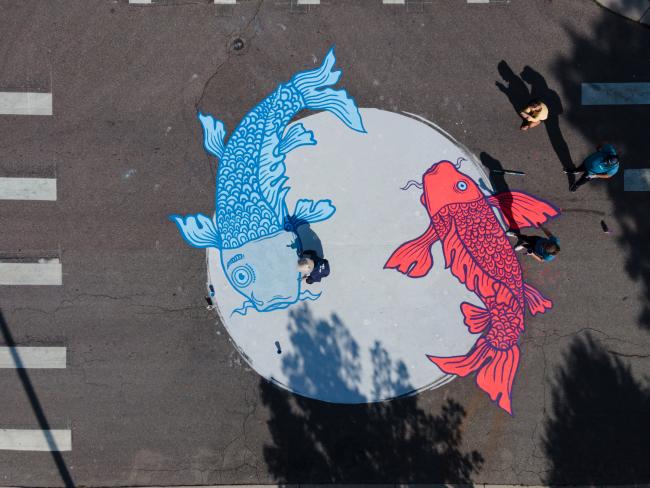 We’re a part of Cool Connected Westwood, a coalition of community organizations, residents, and the City and County of Denver that is working to transform a neighborhood that has had little public investment, especially in the way of green infrastructure. Westwood has the highest population of children in Denver, and nearly a third of the neighborhood lived in poverty in 2017. Seventy-eight percent of residents are Hispanic or Latinx, and 4 percent are Asian American.

For Ratha Sok, a self-taught artist and first-generation Cambodian-American, the idea for the koi fish mural, which he painted alongside neighbors and students last August outside the school, sprang from his own cultural connections. “It represents good luck and fortune,” he said, referring to koi fish, “and that is something that appeals to the Asian-American and Pacific Islander community in Westwood.”

Pedestrians seem to enjoy the fact that the murals are painted directly on the street, he said, rather than the side of a building. “It is an unassuming place and typically causes a pleasant surprise,” he added. “[The murals] provide a vibrant positive energy.”

Sok is one of three artists working on the street-art projects in Westwood. The others, Kayla Gilbert and Santiago Jaramillo, have taken turns with the mural designs, and all have worked together to bring the designs to life in intersections throughout the neighborhood. 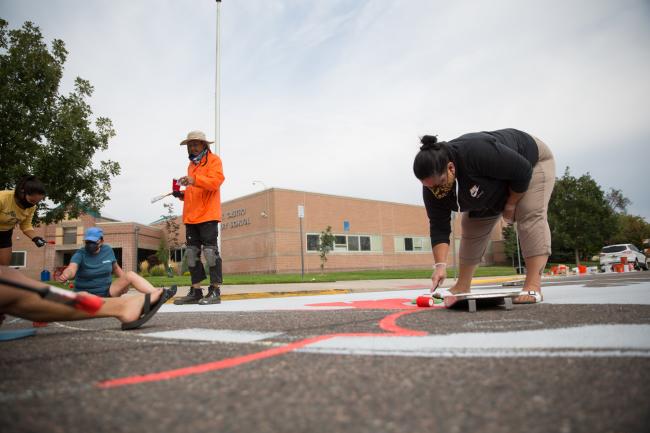 Artist Ratha Sok, in orange, incorporated symbols from his Cambodian heritage into the mural he designed along the Westwood Via Verde. The koi fish “represent hope and good luck,” he says. Photo: F40 Studio

Gilbert, who grew up in a suburb of Denver, has lived in Westwood for the past six years. She was drawn to the community not only because her grandparents had grown up there, but because of the lively art scene.  “I’ve always loved street art,” she said. “And Westwood has some of the most vibrant, beautiful community art in our city.”

Largely self-taught as an artist, Gilbert works for Denver’s Department of Transportation and Infrastructure, managing a grant program that encourages physical activity through community engagement. Her contributions to Westwood Via Verde, where she is volunteering her art skills, merge her interests in art and sustainable transportation.

“One of the things we’ve done in Westwood is to use art to encourage walking, biking and transit,” she said in a phone interview. “My primary medium is graphic design and digital art, but I’ve wanted to do larger murals.”

Members of Cool Connected Westwood aim to use projects like the Westwood Via Verde to improve community health, mitigate heat islands, and improve air and water quality. Heat islands form in cities when pavement and concrete absorb heat, making urban areas warmer than surrounding suburbs. Planting trees and creating parks can help add cooling shade and increasing “evapotranspiration,” a process in which moisture is pulled from the soil and released through leaves, cooling air directly. Trees counter air pollution by capturing small particles on their surfaces—such as dust, ash, pollen, and smoke—and absorbing harmful gases like sulfur dioxide and nitrogen oxide.

The Westwood Via Verde will also foster pedestrian safety. “It’s a very car-oriented community in general, with a few busy thoroughfares where cars tend to speed,” says Chandi Aldena, project manager for the Colorado Parks for People Program in our Denver office. “Families, kids, and others were less likely to walk around the neighborhood, and to the park and school, because of those safety issues.” 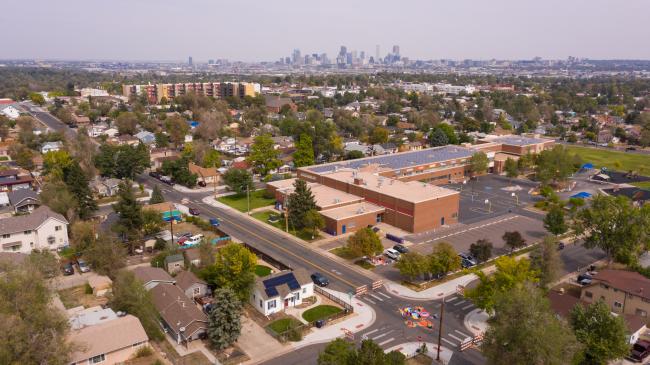 Artists and residents hope the Westwood Via Verde will create safer, more fun ways to get around the neighborhood by foot and by bike. Photo: F40 Studio

Several years ago, students at the University of Colorado partnered with Cool Connected Westwood to propose ideas for connecting various neighborhood projects and resources, including pocket parks, bike paths, schools, and a food co-op. Then, residents and the coalition partners worked together to prioritize projects and define a 3-mile route through the neighborhood. We’re working alongside partners to begin implementing these improvements.

The four murals, depicting earth, air, fire, and water, are part of a broader wayfinding effort to help guide residents along the Westwood Via Verde. The wayfinding tools rely on visual elements such as a butterfly logo, which will appear on utility poles, banners, lawn signs, and some of the street murals. Butterflies will also be fabricated from metal and attached to the facades of buildings, so people can glance up and know they are on the Via Verde. In addition, plans call for directional signs in English, Spanish, and Vietnamese, with information about the time it would take to walk to a park or other destination on the trail.

For the artists, celebrating the neighborhood’s diversity is paramount. For instance, in researching the phoenix-and-dragon mural, which represents fire, Gilbert did a deep dive into various references and meanings. “I was reading about fires and their cultural significance and learned that in Chinese feng shui, the phoenix and dragon are used together to symbolize harmonious communication,” she says. Artist Santiago Jaramillo used Aztec iconography in conceiving the butterflies that frame the mural of the phoenix and dragon at Munroe Elementary School. (Gilbert designed the phoenix and Sok created the dragon for the mural.) 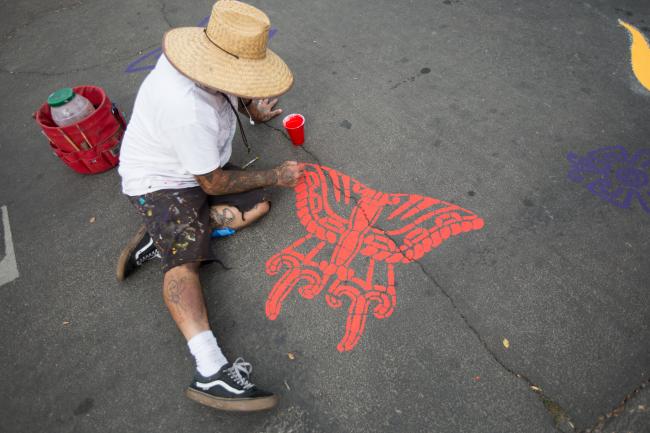 Another mural, designed by Jaramillo, debuted this summer next to Westwood Park, which underwent a major renovation in recent years, with our help. The park now has Fitness Zone® areas, a walking trail, nature play features, pollinator gardens, and a kiosko, a kind of gazebo common in Latin America that provides a gathering place for residents at the heart of public plazas.

Painting murals on the street poses challenges, however. For the first two, the streets had to be closed to traffic for several hours so the artists could work and the murals, which measure 30 feet across, could dry. Because of the pandemic, the number of volunteer painters was limited to twelve—mainly families with young children from the surrounding neighborhood.

“We chalked out the outlines and community volunteers helped us paint it in—like ‘paint by number,’” Gilbert explains. “Usually we recruit as many people as we can, but we couldn’t do that this past year.”

In addition, the artists had to use a special paint that stains the asphalt and dries quickly. “It has a sandy grittiness, so it isn’t slick or slippery,” Gilbert said of the painted surface. “It will eventually get dingy, but we expect to get two or three years out of it.”

Altogether, the murals convey the theme of earth, air, fire and water. Gilbert has designed a mural depicting air. She has chosen a design that features an eagle flying over mountains. The mural is slated for installation in fall of 2021 at Cuatro Vientos/Four Winds Park, which, when it opened in 2014, was the first new park in Westwood in three decades. We were a key partner with the City of Denver on the park project, helping to buy a vacant property that had formerly housed a trailer park. 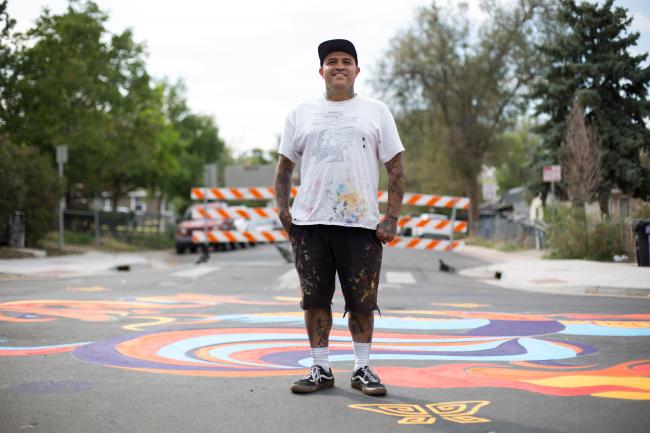 “There is a sculpture in the park of an eagle, and cuatro vientos means “four winds” in Spanish,” says Gilbert, explaining her design inspiration. “The park also has a beautiful view of the city, an eagle-eyed view.”

Want to learn more about projects like these? Visit our Equitable Communities Fund page to read about the organizations—like Jaramillo’s D3 Arts—that we’re working with to improve access to the outdoors nationwide, and see how you can help.