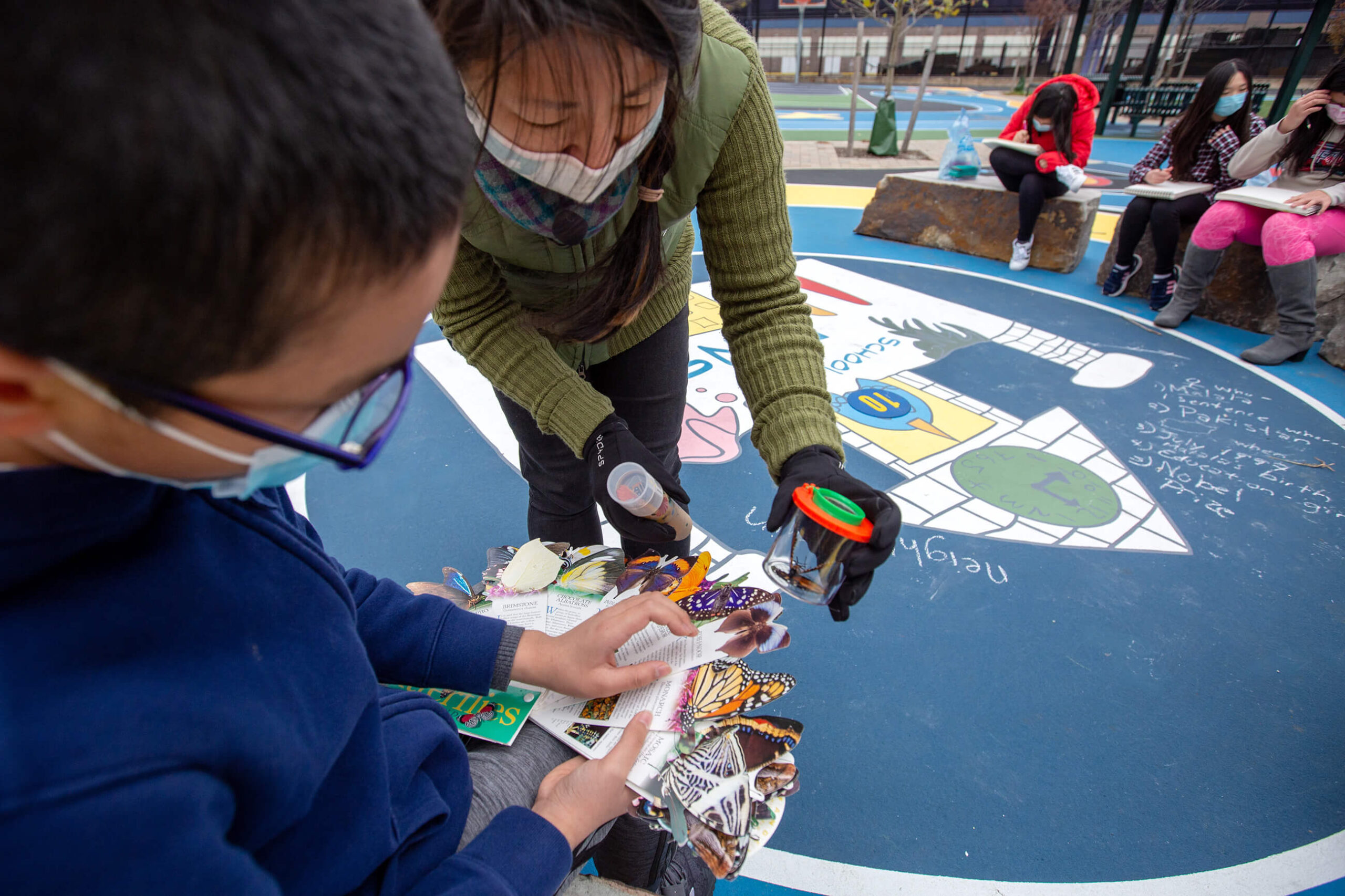 Taking class outside is one answer to the challenges posed by social distancing and the higher risks of virus transmission indoors. But too many schools don’t have safe, welcoming outdoor spaces that students and teachers deserve.

By Trust for Public Land | Photos by Alexa Hoyer

A year ago, Jeremy Kabinoff was already looking for reasons for his students to spend more time outside. “There are afternoons when you check the pulse of the room and the kids are a little jittery and loud,” said Kabinoff, principal of P.S. 184 in Manhattan’s Chinatown. “Sometimes, just going outside for 15 minutes will give you a better flow to your afternoon, especially with the little ones.” The Trust for Public Land had recently helped renovate the schoolyard at P.S. 184, adding trees, gardens, a turf field, and a yoga circle. So for the first time, his students had access to a welcoming outdoor space, right on school grounds.

The redesigned schoolyard at P.S. 184 in Manhattan features new play equipment, trees, gardens, a gazebo, a yoga circle, a playing field, and murals designed by students.

Then the pandemic hit—and outdoor learning went from occasional perk to everyday necessity. As educators in New York City and throughout the country have sought solutions to the challenges posed by social distancing and the higher risks of virus transmission indoors, taking class outside is an answer to crowded indoor classrooms, where administrators are striving to space desks six feet apart.

There are more than ninety thousand public schools across America, and nearly every one includes a schoolyard. But as little as one percent of them are designed with the kinds of green space and play features that the school and greater community need and deserve. In New York City, over a thousand schools have turned to outdoor learning during the pandemic, but hundreds lack adequate outdoor space. Instead, teachers and students are making do with blocked-off streets or asphalt lots.

Meanwhile, students and teachers have seen some unexpected benefits to outdoor instruction. At P.S. 184, gym and art classes moved outside in the fall, along with English and afterschool programs. Just before Thanksgiving, the Department of Education decided that all middle and high schools would go remote, as COVID cases crept up. But Mr. Kabinoff hopes that when the middle schoolers do return, the half-acre schoolyard will once again play a vital role in the life of the school.

“Some of our kids are cooped up in apartments when they get home, and parents want their children outside unless it’s raining or snowing,” he said. “The teachers are setting up innovative things so kids get some fresh air and some movement activity.” 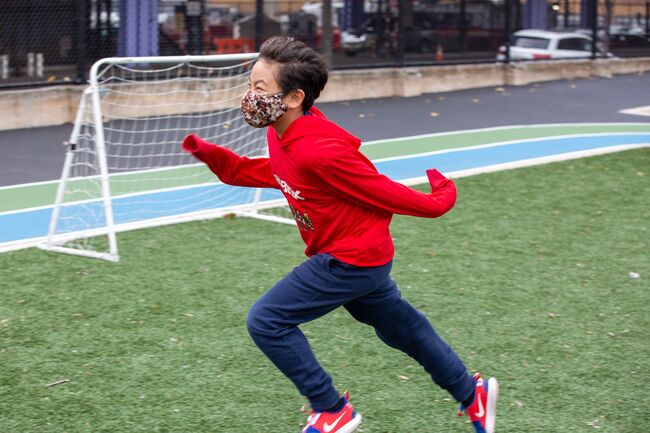 The redesigned schoolyard makes a great place for outdoor learning … but it’s also a recess wonderland, with a turf field, track, and plenty of space to run wild.

No one understands that better than E-Anna Soong, an art teacher whose spacious classroom was given over to other subjects to allow for social distancing. She found herself teaching art outdoors by default, but she soon grew to love it.

“The outdoor space is so much better than staying in the room,” said Ms. Soong shortly before her classes went remote late last fall. “There’s so much to be inspired by outdoors. They can learn about lighting and shading. They can actually look at a tree and see the texture—not just at a picture that I show them on a screen. Their work is so much more detailed.”

Her students agree. Sophia Yuen, a 12-year-old from Brooklyn, was intent on her sketchpad, trying to get the perspective right on a tree in the schoolyard, with two buildings in the background. “It just feels really good to be outside,” she said. “It’s nice to get fresh air when you’re stuck inside for months.”

Isaac Nadich, a sixth grader who lives in lower Manhattan, also enjoys learning al fresco, as much for what it includes—fresh air, natural light and ample space—as what it doesn’t. “You don’t have to use a smart board and look at a screen all day,” he said. “Outside you can use real references—like I’m drawing that tree over there. And it’s nice to bond with your classmates outside.” 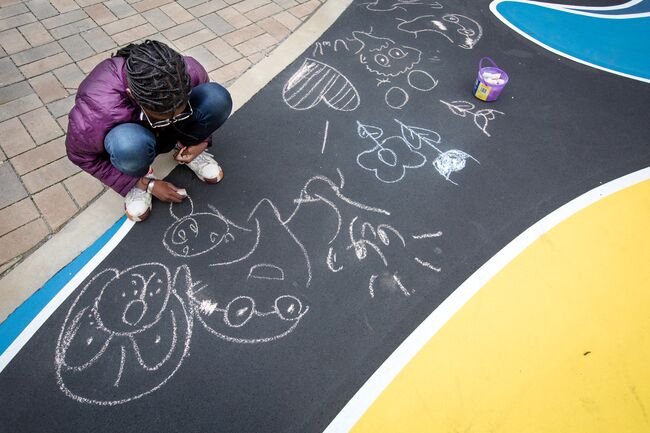 When art class heads outside, “You don’t have to look at your screen all day,” said one student at P.S. 184.

The Trust for Public Land, which has helped renovate more than 200 schoolyards in New York City, encouraged partnering schools to take advantage of their outdoor space. The organization recently organized a “math in the playground” webinar for elementary school teachers and made special kits available to ease the transition outdoors. Each kit included a wagon, clipboards, and seat cushions.

During the participatory design process for the new green schoolyard at P.S. 184, The Trust for Public Land enlisted experts—the students themselves—to pick play features and design elements. They also learned about the importance of diverting storm water from the city’s wastewater treatment system, which is overwhelmed by the volume of combined rain and sewage during moderate to heavy rainfall. As a result, dozens of times a year in New York City, raw sewage is discharged directly into local rivers and bays.

Working with the city’s Department of Environmental Protection, The Trust for Public Land has made stormwater capture a goal of every schoolyard renovation. We install turf fields that are specially designed to absorb rainwater and plant naturally thirsty native shrubs and flowers. The gazebo at P.S. 184 even sports a green roof to sop up precipitation.

Flowers and trees, including elms, sycamores, and London planes provide cooling shade and a pleasing backdrop while attracting wildlife. Eighth grader Khadija Sankara has seen squirrels, songbirds, and monarch butterflies. “I like to draw outside,” she said. “There are so many different subjects. I love the squirrels.”

“Students see how lush the green roof on the gazebo looks after it rains; they notice the pollinators on the native flowers,” says Tiffany Briery with The Trust for Public Land. “These experiences will set them up to be environmental stewards.”

Tiffany Briery, Trust for Public Land New York City Playgrounds program manager, was pulling weeds amid the spent coneflowers, milkweed, and hydrangeas during an afterschool program last fall. While students mainly learned about the environmental benefits of green schoolyards during the design process, she believes the lessons will linger.

“Students see how lush the green roof on the gazebo looks after it rains; they notice the pollinators on the native flowers,” she pointed out. “These experiences will set them up to be environmental stewards. If it’s safer for them to be outdoors during COVID, then that’s extra time the children get to be in nature, and reap the benefits.”