Crafted to evoke native rock, the boulder has a large circle cutout in the center that affords a spot-on view of the Statue of Liberty. Since its debut, the boulder has proved irresistible for young and not-so-young visitors alike.

With a stiff breeze blowing off New York Harbor, Rachel Dean and Ian LeRoy, both 29-year-old professional musicians, decided to tackle the new Community Climbing Boulder on Governors Island. It was the Fourth of July, and the island played host to thousands of visitors: New Yorkers and tourists who were there to explore the bike paths, walking trails, gardens, hammocks, and foodie venues the island has become famous for.

The latest addition to this outdoor experience is a climbing boulder, which the Trust for Governors Island, in partnership with Trust for Public Land and The North Face, unveiled on June 7. Rising about 12 feet, the boulder was crafted to evoke native rock and has a large circle cutout in the center—not unlike a giant bagel—that affords a spot-on view of the Statue of Liberty. Since its debut, the boulder has proved irresistible for young and not-so-young visitors alike. 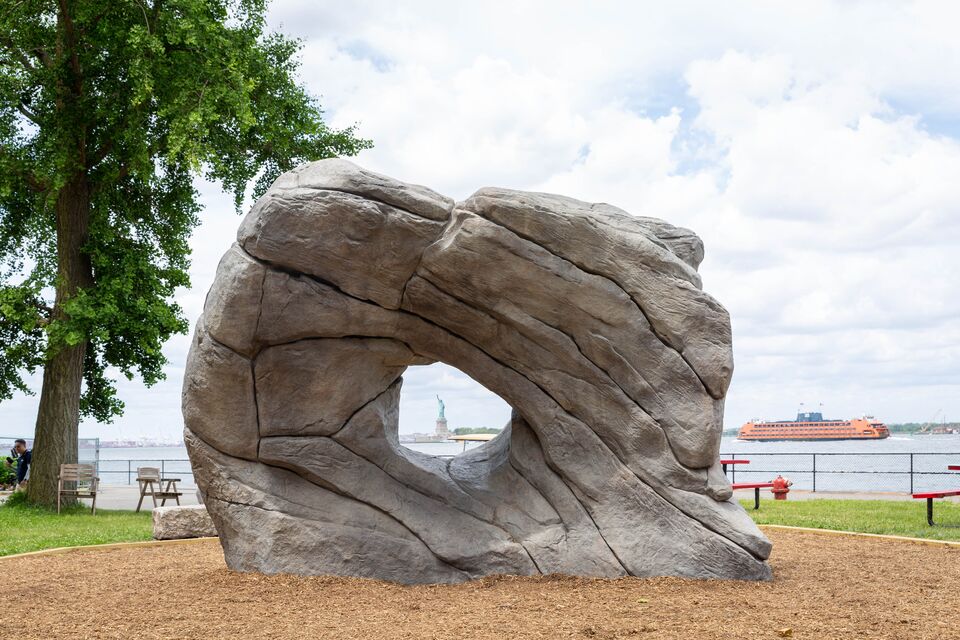 The Community Climbing Boulder on Governors Island features a photo-ready cutout that frames the Statue of Liberty. Photo: Alexa Hoyer

Dean and LeRoy are self-described amateur “boulderers.” (Bouldering is a form of climbing done on small rock formations or synthetic rock walls without ropes or harnesses.) The couple frequently visit an indoor rock-climbing gym in Queens where they live, but this was their first boulder in a parklike setting.

The two inspected the crevices in the rock face, looking for places to attach. When LeRoy’s head was turned, Dean scrambled to the top in a mere seven seconds. “Oh dang!” he exclaimed upon noticing her ascent. “Great job.” More impressive was that she climbed up the “hard” side; the boulder was designed so that novices can ascend an “easy” side while more experienced climbers can try their hands (and feet) on the other. 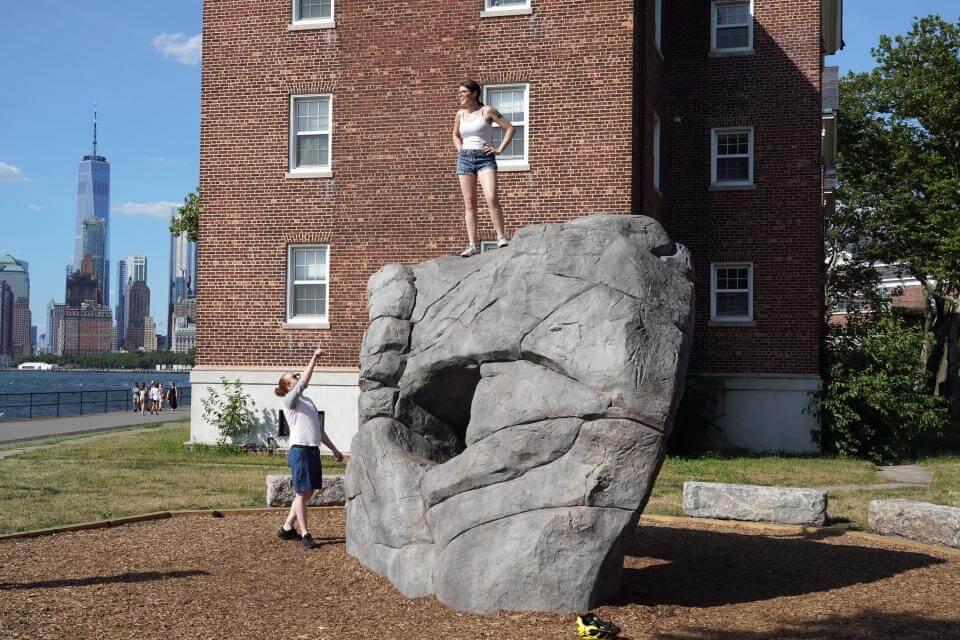 In recent years, Trust for Public Land has partnered with The North Face on other climbing boulders, from Montebello Open Space Park in Denver to Palmisano Park in Chicago, in an effort to lower barriers and create a welcoming community around climbing. This is our inaugural boulder in New York City (another is planned for Harold Ickes Playground in the Red Hook section of Brooklyn).

Carter Strickland, vice president for the mid-Atlantic region and New York state director at Trust for Public Land, considered Governors Island an ideal location. The 172-acre island is a former army and coast guard base that opened to the public in 2005. Just minutes by ferry from Lower Manhattan and the Brooklyn waterfront, the island has emerged as an award-winning park complemented by dozens of historic buildings and year-round educational and cultural programs.

The new boulder is located on the Western Promenade adjacent to Collective Retreats—a business that rents tentlike structures for “glamping”—and New York Harbor School, a public high school focused on environmental education. “It’s an unprogrammed part of the island, and they’ve been looking for ways to attract people,” Strickland notes. “We want to introduce climbing to nontraditional audiences and create an outdoor experience in a city where many people can try it out.”

Next up were Alexander and Fiona, ages 13 and 8, respectively, whose parents are good friends. The families decided to spend the Fourth of July together on the island, and the children were posing together in the boulder’s aperture for an obligatory photo op. Asked if the boulder was challenging, Alexander allowed that “it can get a bit hard.”

The boulder’s design was inspired by two groups of campers who spent a day with North Face–sponsored professional climbers Cedar Wright and Fred Campbell last year. Wright is a National Geographic Explorer who serves as a contributing editor for Climbing magazine, while Campbell is a data scientist with a PhD in statistics and a team member of the first all-Black expedition at Mount Everest in spring 2022.

The children started off with a workshop at an outdoor climbing facility in Brooklyn, where the expert climbers inspired them with impressive moves and helped them solve problems from intrusive overhangs to a “dyno” that stumped nearly everyone. A dyno is dynamic movement that involves momentum to reach the next hold. 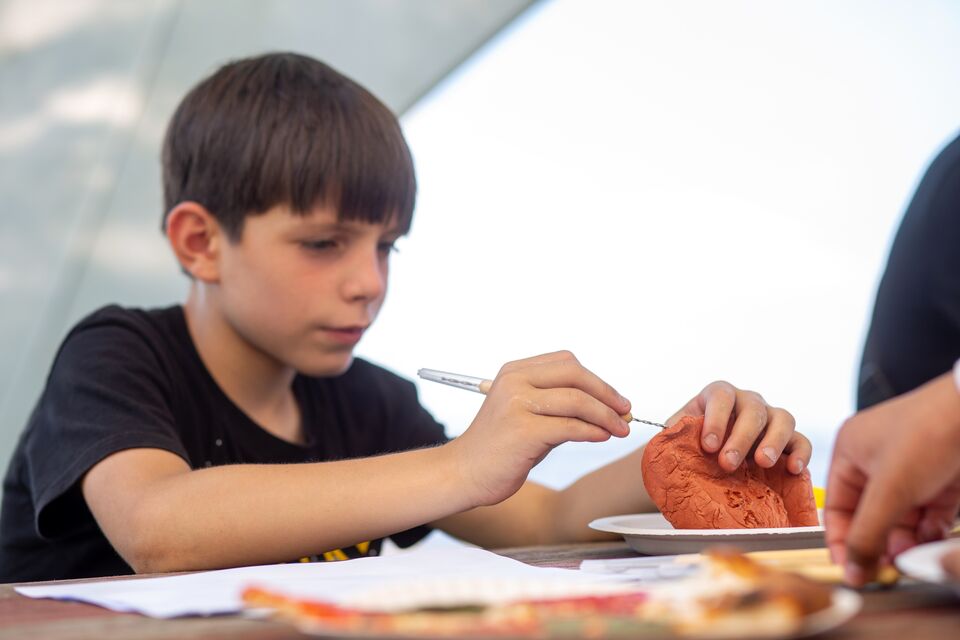 A participant in a boulder design event hosted by TPL and The North Face focuses on the details. Photo: Alexa Hoyer

The campers then boarded a ferry for Governors Island, where they participated in a design workshop in which they were given mounds of modelling clay and told to fashion the climbing boulder of their dreams. The idea for an opening in the boulder actually came from one of the campers. “We want to hand over a better world to the people who follow us, and that’s what the kids did last year,” Strickland adds. “The design process is real­ly critical. We want to create outdoor spaces that are yours. So stop by and give it a climb.”

Governors Island is open to the public daily, and ferries run between the Battery Maritime Building at 10 South Street in Lower Manhattan and Soissons Landing on the island, as well as from two Brooklyn locations on weekends through September 25, 2022. For schedules and ticketing information, click here.