Pearl Farm, New Hampshire supplies maple syrup to its surrounding community, but that’s not all that makes these 275 acres sweet! They also provide critical open space, wildlife habitat, and a local food source to the rapidly growing population.

Picture, if you will, a maple sugar harvest. It’s a storybook scene: a snowy New England forest, a bucket hanging on every tree catching a steady drip of sap, and a big vat simmering sweetly over a wood fire in a tumbledown barn, slowly reducing the sap into rich, amber syrup.

“Nope—mine doesn’t look like that at all,” says Howard Pearl, whose family has been farming the same land in Loudon, New Hampshire, since the late 1800s. “What we’ve got going is a much more technological type of operation.” Like a lot of family farmers, Pearl learned his trade from working alongside his father as a teen and young adult. But that doesn’t mean his operation is stuck in the past. 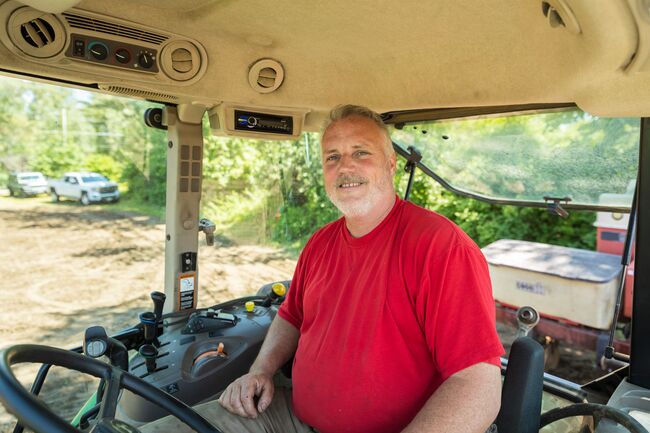 Howard Pearl’s family has been farming this land in Loudon, New Hampshire, since the late 1800s (and they farmed across town before that).Photo credit: Jerry and Marcy Monkman

Today, the 275-acre Pearl & Sons Farm is a proving ground for maple-industry innovation. It is also a cherished strand in the fabric of Loudon. A family farm passed down through four generations, the land sits atop Loudon Ridge and offers a swath of open space just 20 minutes from the state capital of Concord, in an area that is quickly filling with subdivisions.

Thanks to a deal to protect the land in perpetuity, the town will maintain its agricultural heritage and identity. Working with the Loudon Conservation Commission, Trust for Public Land secured a conservation easement on the property in 2022, which will preserve the town’s rural character by prohibiting development and guaranteeing public access.

While the Pearl family farm stretches back more than a century, the enterprise currently seeks to maximize efficiency. Howard’s 11,000 taps are connected by a network of vacuum tubing—450,000 feet in all—that induces the tree to produce more sap and pipes it to a centralized location. The collected sap then passes through a reverse osmosis system that filters out 80 percent of the water that would otherwise need to be boiled off. “That cuts down significantly on our fuel,” Pearl says, “And I can make as much in an hour using osmosis as it would take me in a whole day of boiling.”

From the traditional to the futuristic, Pearl and his fellow maple producers in Loudon are part of the agricultural backbone of this town of 5,600. Once maple season ends—usually around mid-April—Pearl turns his attention to his fields, where he grows vegetables such as zucchini, winter squash, and sweet corn to supply local wholesalers and farm stands. 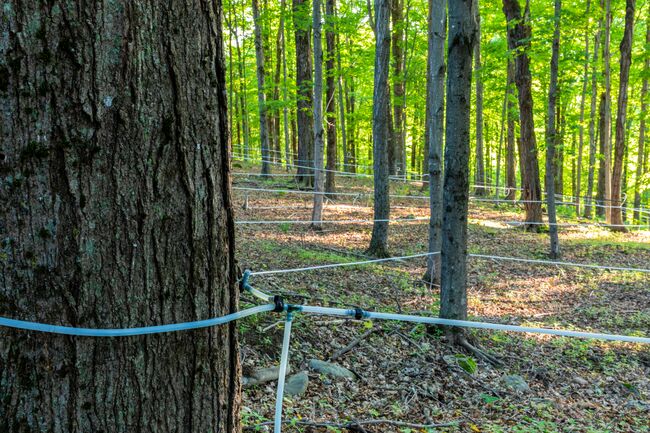 Each of Pearl’s 11,000 taps is connected by a network of vacuum tubing—450,000 feet in all—that induces the tree to produce more sap and pipes it to a centralized location. Photo credit: Jerry and Marcy Monkman

But maple technology isn’t the only change that’s come to Loudon since Pearl was a kid. “There used to be six farms along our road, and throughout my lifetime, they’re all gone,” he says. In Loudon and across New England, more small producers like Pearl are struggling to make ends meet, and many have sold their farms.

“Loudon is still rural, still affordable, but as close as we are to Concord and Boston, we’re growing very fast,” says Julie Robinson, who chairs the Loudon Conservation Commission. “Agriculture plays a significant role in stewarding Loudon’s rural landscape, and it’s central to our economy, our culture, and our history.”

That’s why the community has come together to protect farmland. So far, Loudon residents have voted to preserve three local farms, directing their tax dollars to cover part of the cost of conservation easements that ensure the land will never be built on, while providing local farmers with much-needed revenue from the sale of their development rights. The conservation commission has also received funding from the New Hampshire Land and Community Heritage Investment Program—a source of state funding for conservation that Trust for Public Land has long advocated for in Concord. 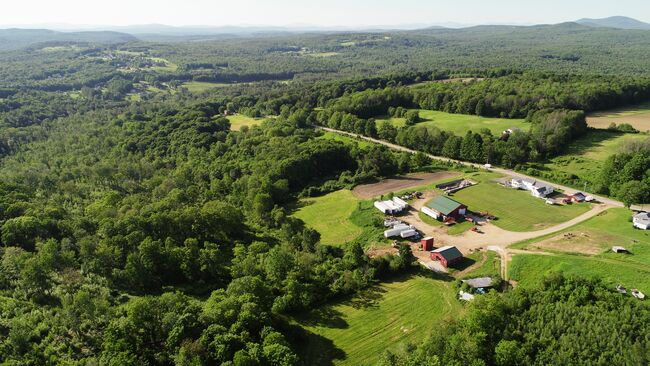 “There used to be six farms along our road, and throughout my lifetime, they’re all gone,” says Pearl. In Loudon and across New England, more small producers like Pearl are struggling to make ends meet, and many sold their farms. Photo credit: Jerry and Marcy Monkman

The deal to conserve the Pearl farm creates an opportunity for the public to use this land for recreation, although no new trails are planned. “At the top of the farm, you’re just looking over the farmland and forestland of Loudon Ridge, which is one of our highest areas in town,” says Robinson. “It’s just a beautiful pastoral view of farmland and some water and trees.”

Meanwhile, the income from the sale of the easement will help Pearl stay in business, and make for a smoother financial transition to the next generation of farmers who will care for this land. This long-term stability is especially important for maple growers, says Pearl, noting that trees don’t start producing sap until they’re at least 40 years old. “You can’t just go make a maple orchard,” he says, “It’s taken generations to get where we are, and I’ve spent a lot of my life planting, weeding, and cultivating, to where there’s just now a lot of growth potential here. The next generation after me is going to have one hell of an orchard.”