Stories
A Big Win for People and Wildlife in New Mexico

This 54,161-acre acquisition guarantees access for the public and members of Indigenous groups for whom parts of the area are a traditional cultural property—while protecting wildlife habitat and migration corridors.

In a rugged corner of New Mexico on the flank of Mount Taylor, herds of elk migrate along rock ledges through stands of ponderosa pine. Black bears and mountain lions range across grasslands down into dense valleys of pinyon and juniper. Fractured rock ledges, striated cliffs of rose, mauve, and ocher, and towering mesas add to the wild landscape.

This is Trust for Public Land’s L Bar project, a 54,161-acre expanse of culturally and ecologically important land bordered by national forest on one side, a state wildlife area on another, and the Pueblo of Laguna on a third. It is a major acquisition of wild land in New Mexico, according to Greg Hiner, the Colorado and Southwest director of land protection at TPL.

Now, the sprawling property is on its way to being permanently protected. Trust for Public Land has acquired two adjoining properties: a 17,701-acre parcel that rises to an elevation of nearly 9,000 feet, and a lower parcel that measures 36,460 acres. As of June 2022, two-thirds of the property has been conveyed to the New Mexico Department of Game and Fish as an addition to the adjacent Marquez Wildlife Area, with the remaining portion being conveyed over the next several years. However, the property will not open to the public until a future date. The addition of the L Bar property will more than quadruple the existing wildlife area’s size, making it the largest state-owned recreation property in New Mexico.

“Because of its size and elevation, the property protects a variety of habitats and allows species to move through zones that will mitigate the impacts of climate change,” Hiner says. “Scenically, it’s very dramatic as you move from these vast upper mesas at 8,000 or 9,000 feet into the lower valley, where there are dramatic cones. It’s a prototypical southwestern landscape.”

Part of the landscape is considered a sacred pilgrimage site by as many as 30 Native American tribes. In 2009, some 400,000 acres on and around Mount Taylor, an extinct volcano rising to 11,300 feet, were designated under state law as a traditional cultural property. The Pueblo of Acoma, the Pueblo of Laguna, the Hopi Tribe, the Navajo Nation, and the Pueblo of Zuni have called the area home for more than a thousand years.

“About half of L Bar is within the Mount Taylor Traditional Cultural Property, and that is an important part of the story,” says Jim Petterson, vice president of Trust for Public Land’s Mountain West region. “As protected public land, members of the tribes, nations, and pueblos who value it once again have access in perpetuity.”

Theresa Pasqual, a program director of Pueblo of Acoma, says Mount Taylor—near where the L Bar property is located—has always had a meaningful role in the life and culture of her community. “It’s significant to Acoma in terms of how we orient ourselves to the landscape,” she says. “This particular mountain is associated with the cardinal direction of north, and there is associated religious and cultural significance tied to it.” 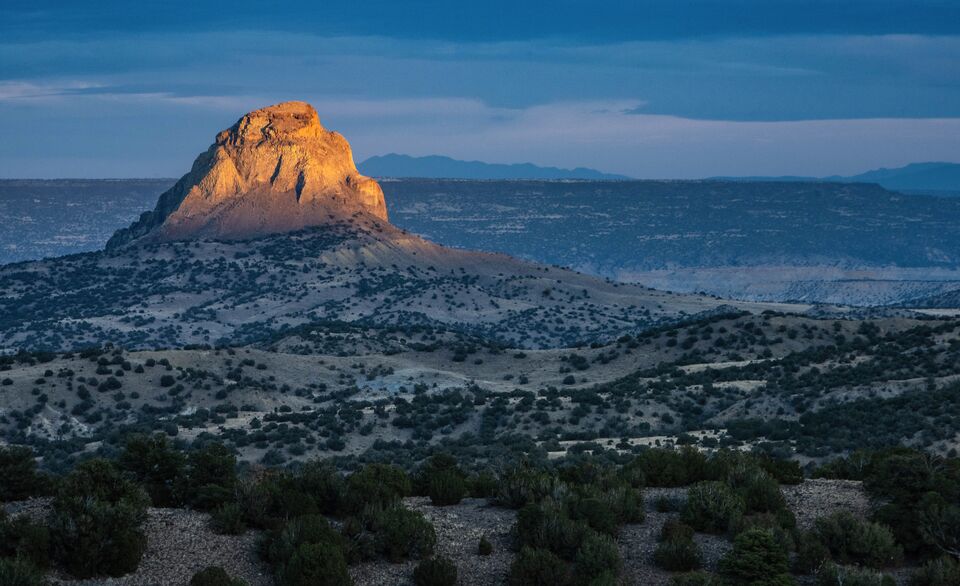 Beautifully sunlit in this winter shot, Mount Taylor is a traditional cultural property with significance to as many as 30 Native American tribes. Photo: Dave Cox/Mountain Media

Generations ago, she says, before L Bar became privately owned, the Acoma people would have used the natural resources there, such as timber, plants, and wildlife. The upper portion of the property would also have provided valuable lookouts in all directions, helping Pueblo members see distant communities and potential trade routes, as well as migration paths of elk and deer.

“The purchase and protection of the L Bar property represent the potential for younger generations of Acoma children who have never seen those lands to now have a chance to get reacquainted with them,” Pasqual adds. Several years ago, Pasqual, an archaeologist, helped lead a multitribe effort to get much of Mount Taylor listed as a traditional cultural property, a state designation; she is eager to seek the same status for the L Bar land once the New Mexico Department of Game and Fish takes control.

Given the property’s critical importance—both culturally and ecologically—Trust for Public Land took a novel approach to its conservation, Petterson explains. Usually, the organization assembles a variety of public and private funding streams in order to purchase a property. It then immediately transfers the land to its permanent owner, usually a state or town government or perhaps a nonprofit group.

But in the case of L Bar, Trust for Public Land will temporarily hold on to a portion of the property. That’s because $10.7 million of the funding is set to arrive in five yearly installments. Other funding toward the total purchase price of $34.1 million came from the State of New Mexico, thanks to backing from Governor Michelle Lujan Grisham and the New Mexico legislature; the federal Pittman-Robertson Wildlife Restoration Act; and a grant from the National Fish and Wildlife Foundation through Walmart’s Acres for America Program.

“Financing $10.7 million over five years can be expensive,” says Petterson. “This is a unique thing that Trust for Public Land can do, and it shows our commitment to the project. That’s the power of being both a national and local organization. We bring local knowledge and financial leverage to the table.”

Part of the L Bar project’s appeal is its proximity to two of the state’s population centers. Albuquerque—New Mexico’s most populous city with 565,000 residents—sits about 45 miles east of L Bar. Santa Fe, the state capital, is located 105 miles to the northeast. The existing Marquez Wildlife Area, with 15,000 acres, can be challenging to reach.

“It’s just tough to get to the wildlife area for a number of reasons,” Hiner says. “As a result, it hasn’t been used as much as it could be. Our project vastly improves access to the overall property and supports hunting, as well as other potential uses, such as camping, hiking, horseback riding, and birding.” 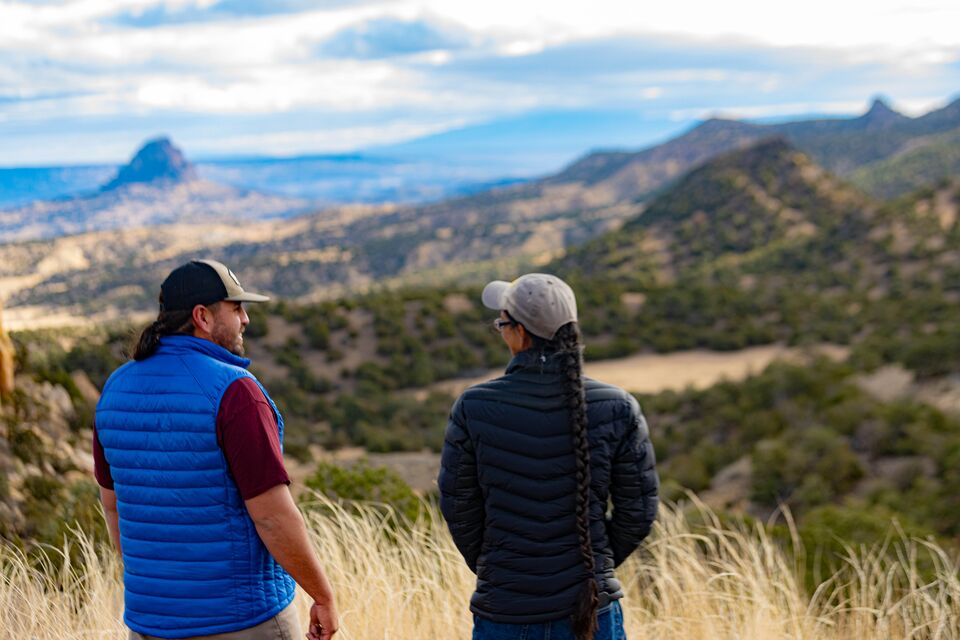 Thanks to persistence and collaboration, public access to the L Bar property will be protected forever. Photo: Dave Cox/Mountain Media

Petterson agrees. “Being thirty miles as the crow flies from the state’s largest population center creates a great opportunity for outdoor access,” he says. “When we are able to assemble large blocks of intact, healthy habitat, that’s an opportunity to seize.”

Local conservationists working alongside Trust for Public Land are quick to point out current barriers to hunting on private properties such as L Bar. Owners of private ranches in New Mexico often lease hunting rights to outfitters, who charge wealthy hunters from the around the country thousands of dollars for the privilege of tracking a 750-pound elk, the state’s largest big-game animal. That elk might then end up as a trophy mount over a far-flung fireplace.

By contrast, the New Mexico Department of Game and Fish offers elk tags through a lottery for $70 to $100 to hunt on public lands, and tags for state wildlife areas are limited to New Mexico residents.

“When out-of-state hunters buy a $5,000 tag, they are not doing it to feed their family,” says Jesse W. Deubel, executive director of the New Mexico Wildlife Federation, which joined TPL in advocating for project funding before the New Mexico legislature.

“But when members of the local community get a tag through a public draw,” Deubel says, “they have a chance to harvest 200 pounds of high-quality, free-range, natural meat. That will provide food for many months. There is real cultural significance in that.”