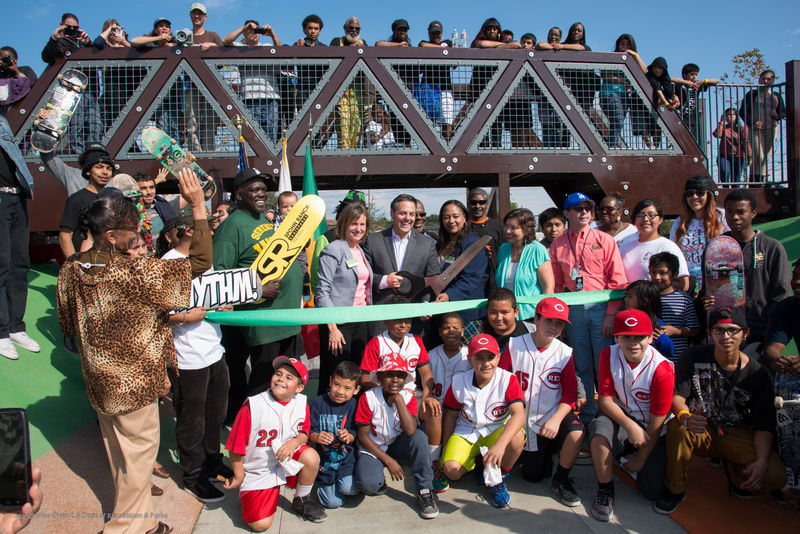 Stories
In L.A., a Community Fights for Its Park

Ronald “Kartoon” Antwine lived across the street from a vacant lot for decades. In this short film and interview, he shares the story of what having a park in that space means to the neighborhood.

Ronald “Kartoon” Antwine lived across the street from a vacant lot on Monitor Avenue for more than four decades. The weedy, trash-strewn lot was a magnet for crime and vandalism; as a child, Antwine remembers his mother, out of concern for the family’s safety, regularly calling the police to report illegal activities occurring there.

When his mother passed away in 1998, Antwine inherited her little blue house on Monitor Avenue—along with her passion to transform the neglected lot from an eyesore into a community asset. After a long, hard fight and with help from Trust for Public Land, he achieved that goal. In this short film and interview from 2013, two years before Watts Serenity Park opened, Antwine shares the story of what a nearby park means to the neighborhood.

What was it like to grow up across the street from a vacant lot?

I am a lifelong Watts resident—54 years, 42 of them in this house. Ever since I was a child, Union Pacific Railroad, which owned the lot, couldn’t have cared less about the property. From the ’70s through the ’90s, the place was covered in weeds. I’m 6’4″, and there were weeds over there taller than me.

When my mother was alive, she used to fear for my sister’s safety. She would make anonymous calls to the police and say there was a dead body in those fields, just to get the police to come out. Eventually my mother and our neighbors would make enough noise so that Union Pacific would get fined and cut the weeds down. But they’d grow right back.

“My mother would make anonymous calls and say there was a dead body in the field, just to get the police to come out.” 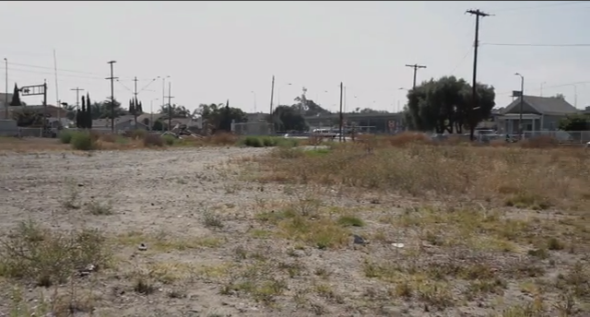 Did your mom always want to turn the space into a park?

The neighborhood always wanted greenery there because the park stands adjacent to the Metro rail line. When you ride the train from downtown Los Angeles to Long Beach, you pass so many cities with greenery along their tracks. You see pretty train stations—with artwork, quality design, and architecture—but all we had in Watts was an empty field. And it’s as if people just skipped over Watts, like Watts didn’t matter, you know?

Tell us about taking up your mother’s fight to transform the space.

Well, Union Pacific sold the lot to a developer. A friend of mine came and asked me to take a ride with him to the Watts Neighborhood Council meeting. As we walked in, the developer was presenting a slideshow about turning the empty lot into housing. He was saying, “These people don’t care about their community.” And as he said that, I looked up and saw a picture of my next-door neighbor’s house on the slide. And then he said, “These people come right out of their house and throw trash into this vacant lot.” And there was a picture of my house! This man was lying. I spoke up and said, “We ain’t never walked out of our house and threw trash over there! It’s people like you that come from other communities and dump into this lot.”

The slideshow set off a spark in me. I kept saying, “We want a park. We want greenery. We don’t need more houses. We have empty houses in our neighborhood that aren’t selling. We need a park instead.”

We hear that people call you the “Mayor of Monitor Avenue.”

Everybody has applauded me—they believe I fought this fight by myself. But it wasn’t only me; it was our whole community. I just sparked enough energy and used some organizing skills.

How did you go about it?

I started by going down the street, telling as many people as would listen about what I had heard at the neighborhood council. That touched a lot of nerves, because the neighborhood has always wanted this lot taken care of. I went and got a Spanish translator to include the Hispanic community. I went to the biggest church in our neighborhood and acquired a meeting place. I went all the way to city hall to tell them that nobody wants more houses here.

How did you first get involved with the Trust for Public Land?

Well, Tori Kjer [former Los Angeles Parks for People program manager] from the Trust for Public Land was putting up flyers around the neighborhood. I called her up and she told me, “We want to build a park.” And then we forged a friendship and fought for the park together.

Ultimately, Tori and the Trust for Public Land came to the rescue—they bought the land and now they’re working with the community to create our park.

How do you think the park will change the neighborhood?

We look at this blight every day. Our life in Watts, we’ve got so much cement, bricks, and steel—it drains the energy right out of us. What is it they say, “Music calms the savage beast?” Well, nature does too. So when you’re around that greenery—when you can breath some nontoxic oxygen—that puts you at peace.

And this park comes right at a time where the OGs [community elders] are helping to forge a gang truce to reduce the murder rate. The park will be built right on the dividing line of onetime warring gangs. The west side of the tracks, where I stay, is Bloods. On the east side of that railroad is all Crips. But today as we speak, Bloods and Crips are crossing that line. Kids from rival gangs are getting to know each other and growing up together.

My kids don’t have to be held hostage because of a gang situation. My kids can go on that side now and mingle with kids over there. The park will bring all of them together even further. That’s the significance. All because the Trust for Public Land has a warrior named Tori.

“The park will be built right on the dividing line between onetime warring gangs. . . . The park will bring them together even further. That’s the significance.”

How has this experience of fighting for the park affected you?
It’s showed me that my mother and father instilled something in me—to fight for the right cause. I had spent the majority of my life [in gangs] fighting for the wrong cause, hurting others, hurting myself and my family. But the way that I live my life today is to try to do something good, every day, so that God erases some of those Xs out of my bad boy box.

What will you do the day the park opens?

Probably go over there and kiss the ground. Then I’ll go from being the Mayor of Watts to the Pope of Watts. And all the women in my neighborhood are talking how they want to get out there on them free exercise machines. We can’t wait.