This photographer’s muse is the landscape he loves
By Trust for Public Land
Published March 7, 2017
Spread the Word

This photographer’s muse is the landscape he loves

Jim Brandenburg has traveled to the ends of the earth as a photographer on assignment for National Geographic. He’s photographed oryx in Namibia, fishermen in China, and muskoxen roaming on the vast Arctic tundra. But wherever his camera takes him, Jim’s heart is on the shores of Judd Lake in the Northwoods of Minnesota.

“It’s my home, and it’s the center of my universe,” he says. “When I’m traveling, I always think back to Judd Lake and it makes me happy.”

Jim spent years exploring the woods on the outskirts of Ely, a gateway to the Boundary Waters Canoe Area Wilderness. But as the years passed, he and his wife, Judy, realized that their favorite places were at risk. “Lots of Minnesota families have had rustic cabins in the Northwoods for generations. As these properties get handed down to kids and grandkids, they’re subject to division and development, which raises the risk that habitat for wildlife could be chopped up and destroyed,” says Jim.

The Brandenburgs set out to save the land they loved. As privately owned properties came up for sale, Jim and Judy purchased as many as they could, taking risks and relying on loans, at first. Late last year, after more than a decade of work with The Trust for Public Land and with funding from the Leuthold Wilderness Foundation, the Brandenburgs met a major milestone when they transferred an unbroken stretch of hundreds of acres of wildlands to the Minnesota Land Trust. Included within it: Judd Lake.

“It’s my home, and it’s the center of my universe,” says Brandenburg of Minnesota’s Northwoods. “When I’m traveling, I always think back to Judd Lake and it makes me happy.”Photo credit: Jim Brandenburg

“I can’t think of a better way to honor this place and what it has meant to Judy and me than to make sure that it’s safe for future generations to enjoy and experience,” Jim says.

Conserving Judd Lake is the latest in the Brandenburgs’ efforts to give back to the land that inspires them. Jim grew up in a farming family in Luverne, a small town in the cornfields of southwestern Minnesota. “A hundred and fifty years ago, that whole area was a sea of tallgrass prairie. But today less than half a percent of it remains unplowed,” says Jim.

To boost that number, Jim helped protect 400 acres on the outskirts of Luverne, a mile from his childhood home. It’s a high, grassy expanse, studded with rocks and boulders—and it has never been tilled. “It was near where my dad farmed, but he could never get a plow in there because it was too rocky,” Jim says. “What made it bad farmland is what has saved it as a scrap of original prairie habitat.”

Working with his childhood friends on the Luverne Chamber of Commerce, and with the U.S. Fish and Wildlife Service, Jim helped establish a public nature preserve on the land. He remembers that first project with a laugh. “It was an unlikely alliance if there ever was one: a whacko artist like me, small-town business-minded folks in the Chamber of Commerce, and the federal government.” Brandenburg named it Touch the Sky Prairie, a nod to the high, rolling ridge that runs through the property and offers a 360-degree view of the surrounding terrain.

Brandenburg has worked to protect and expand native tallgrass prairie habitat in southwestern Minnesota, starting with this rocky remnant of untilled ground. “What made it bad farmland is what has saved it as a scrap of original prairie habitat,” he says.Photo credit: Jim Brandenburg

Over the years, the Brandenburgs have continued to expand Touch the Sky Prairie as land becomes available. The preserve now covers 1,000 acres and provides trails and benches for people to enjoy the rare experience of a tallgrass prairie in full health. More than 120 species of native grasses and forbs grow here, an island of vibrant diversity in a sea of monoculture cropland. Biologists have discovered rare plants here, including the Western prairie-fringed orchid—a delicate, beautiful flower that nearly disappeared as plows broke up the soil.

As for Judd Lake, Jim says he was motivated to protect it because it launched his career as one of America’s most acclaimed nature photographers. “It’s my version of Thoreau’s Walden Pond,” he says. He has spent decades waiting, camera in hand, in all seasons, for the right light to shine on its rippling waters, rocky shores, and tumbling waterfalls. He’s photographed bears, otters, ducks, eagles, owls, and even wolves roaming the forests nearby. Hundreds of Brandenburg’s photographs of Judd Lake have appeared in National Geographic over the years, testament to the land’s inspirational appeal.

“People tend to think of the Midwest as this vast expanse of flat, homogeneous land, with nothing wild left to offer us,” says Brandenburg. “But I think the success I’ve had as a photographer is proof of the richness that’s everywhere in this part of the country … if you know how to look for it.” 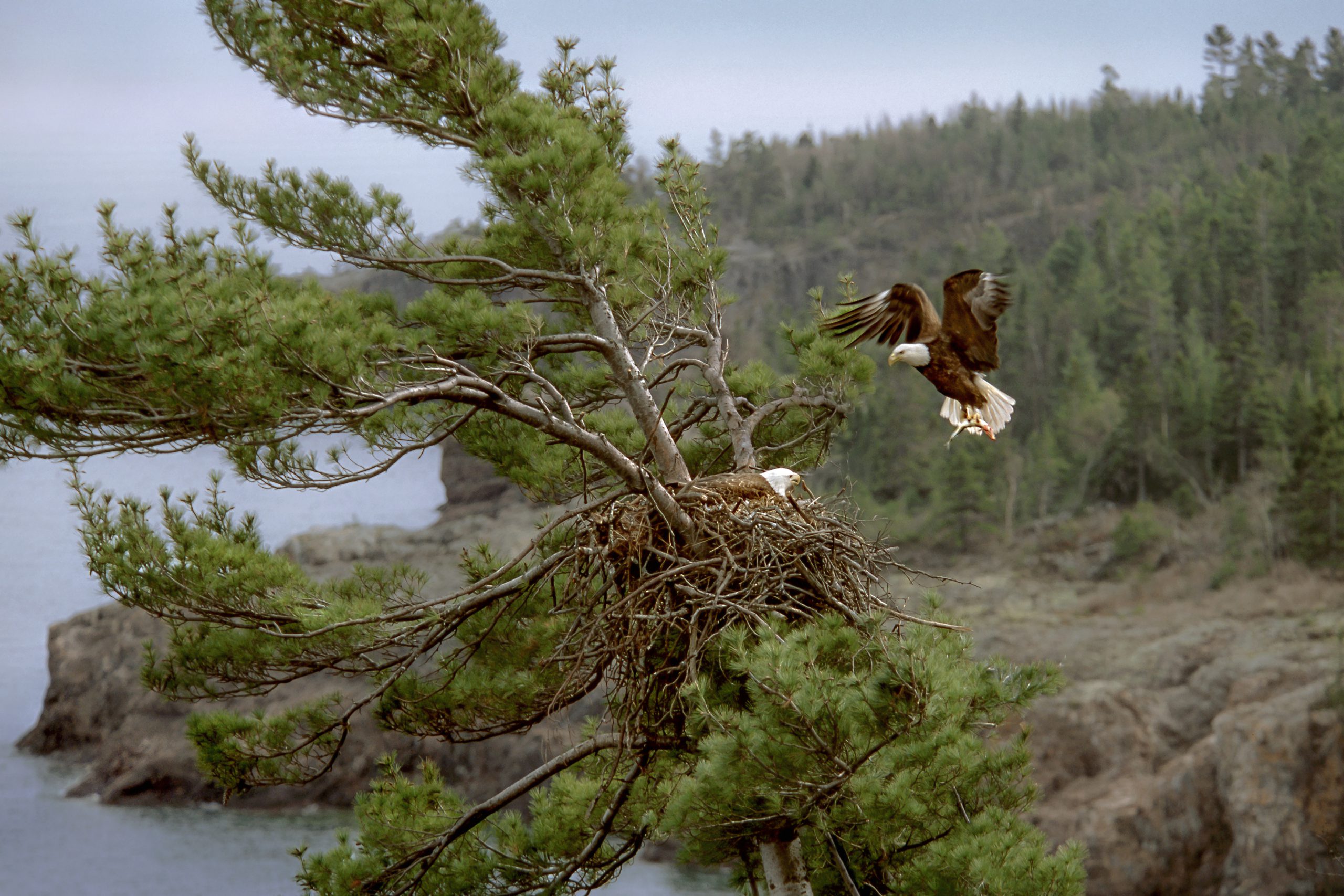 Brandenburg is witness to the rugged nature that thrives in the upper Midwest, like this nesting pair of bald eagles on Lake Superior.Photo credit: Jim Brandenburg

Judd Lake now enjoys strong protections that will prevent it from being subdivided or developed. It will forever welcome paddlers and hikers to experience the place in much the same way that Brandenburg has: patiently, quietly, in search of moments of breathtaking natural beauty.