For Honolulu residents, reviving a forgotten spring is a labor of love
By Trust for Public Land
Published February 1, 2018
Spread the Word

For Honolulu residents, reviving a forgotten spring is a labor of love

Chris Cramer was finishing another day’s work at the edge of Kanewai Spring when he first heard the sound of water. It was faint but unmistakable: a gurgling from somewhere beneath the surface of the pool. “It was the most beautiful noise: water rippling from the spring, through the stone gate, and out into the ancient fishpond,” he remembers. “It meant the water was flowing here again. To know that, after all the work and love that’s going into restoring the spring, I got chicken skin.”

Cramer is president of the Maunalua Fishpond Heritage Center, a community group that works to preserve and restore cultural sites along the shore of Maunalua Bay in Honolulu. The Trust for Public Land recently helped the group purchase and protect Kanewai Spring, one of the last remaining freshwater springs on the island of Oahu. 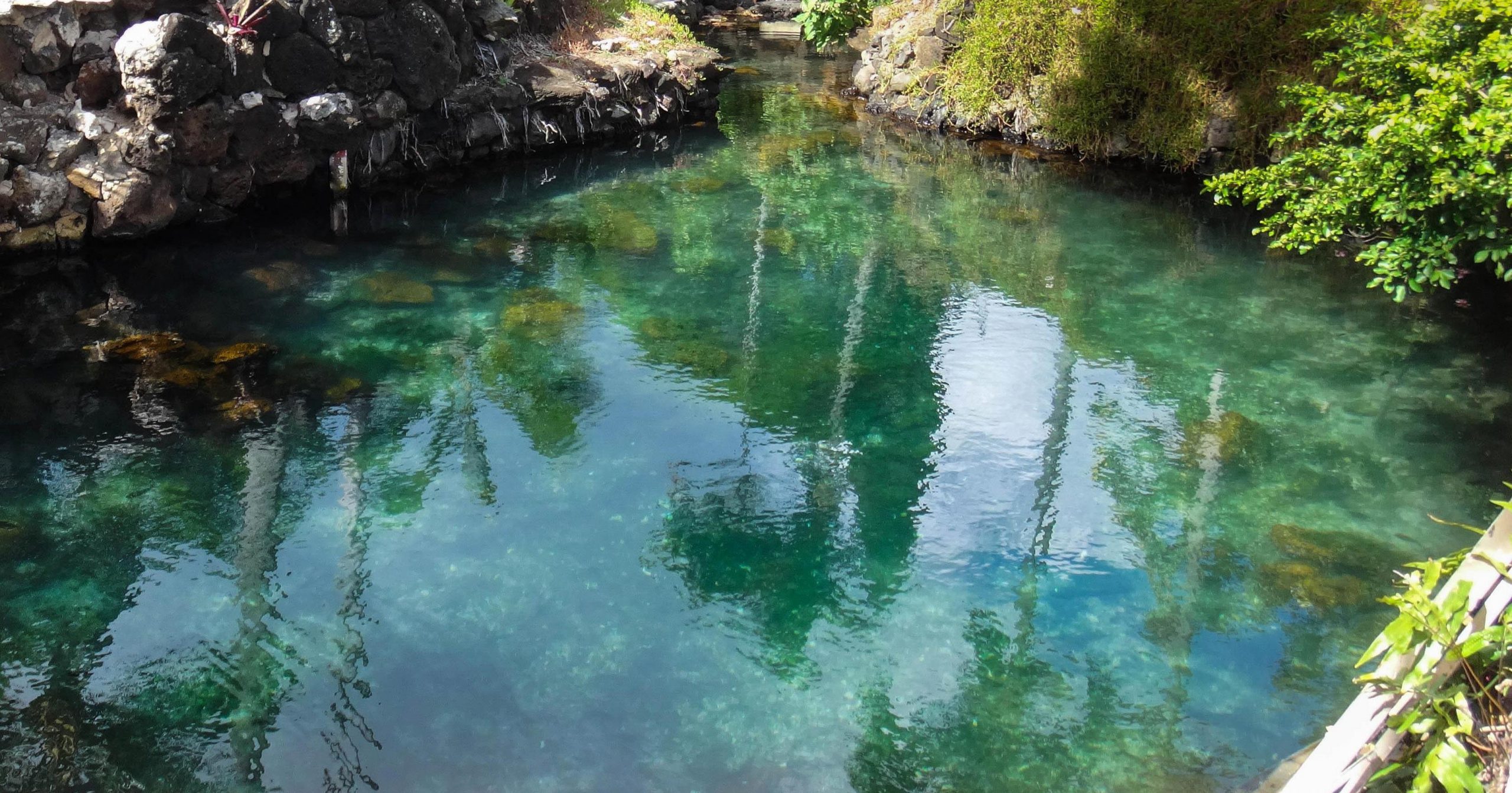 Cramer, an avid local historian, says that this stretch of Oahu’s coastline was once dotted with abundant freshwater springs. “There’s an ancient story from this area about the gods Kane and Kanaloa, how they once walked down this coastline and established the life-giving springs,” he says. “The name ‘Kanewai’ means ‘Water of the god Kane,’ which gives you some idea of what an important source of fresh water this spring was.”

In the past, each spring was tended by a particular family, every generation passing down its knowledge and traditions to the next. Throughout the arid Maunalua summer, the carefully maintained springs provided drinking water and irrigation to nearby fishing villages. The mixing of fresh and salt water created a fertile estuary for fish like freshwater limpets and brackish water mollusks (pipiwai and hapawai) and birds like Hawaiian stilts (aeo).

“People who are just two generations older than me can remember when they would walk down the shore and see clouds and clouds of fish in the water,” says Max Mukai, a descendant of a Native Hawaiian family that’s lived along Maunalua Bay since 1902. “They share stories of fisherman who could feed whole villages and not even know how to swim. That’s testament to the abundance of this area.”

All that changed in the 1940s, when growth in Honolulu began to encroach on this formerly rural area of Oahu. Throughout the 1950s and 1960s, large suburban homes crowded the shoreline and climbed the uplands, and bulldozers filled in almost all of the springs—severing their connection to the sea. Kanewai Spring wound up part of an opulent oceanfront estate, walled off from the families that once cared for it. 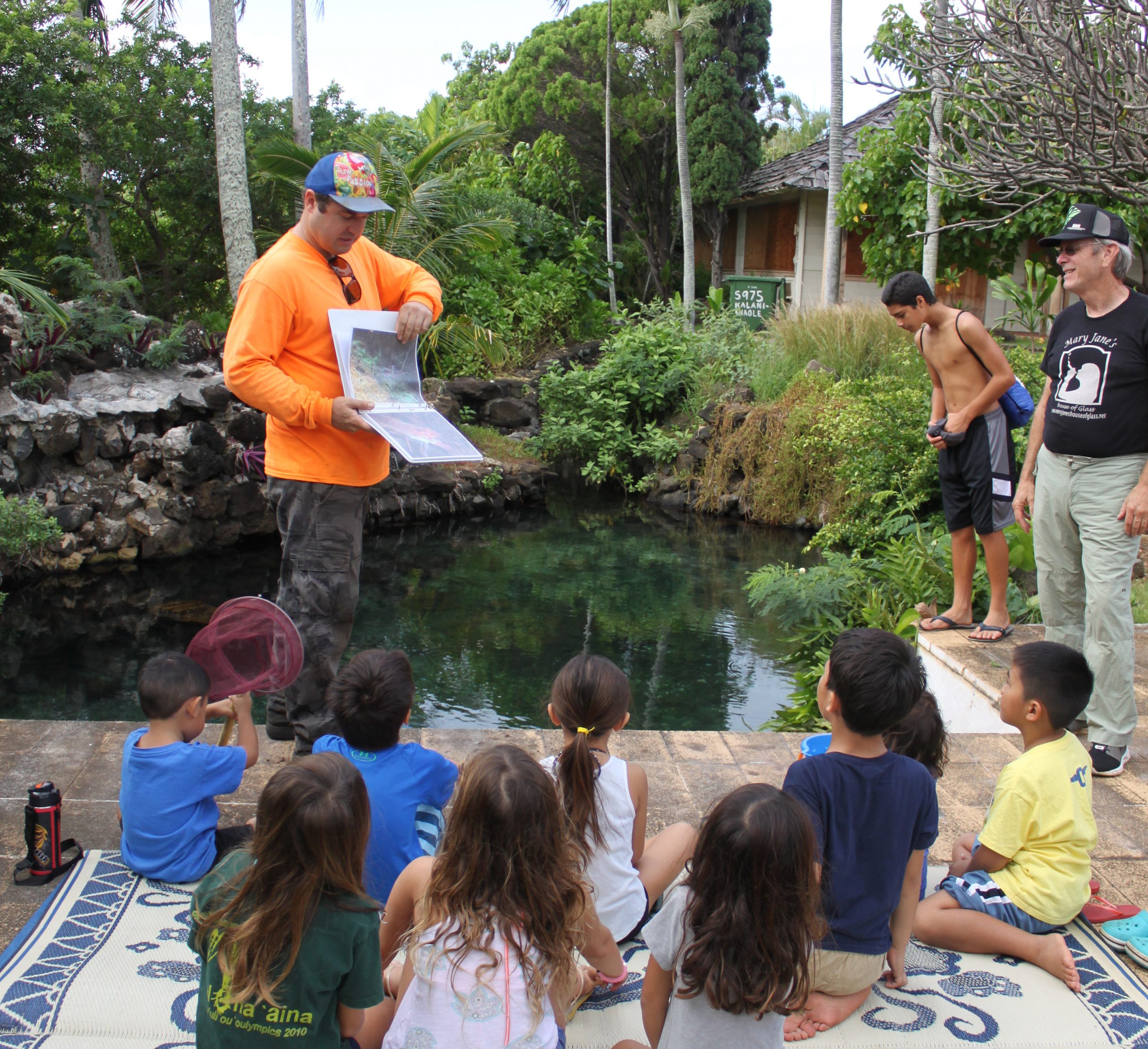 “Kids can come here and learn about the Hawaiian language, how fishponds work, how to restore a functioning system, and how our kupuna lived sustainably,” says Mukai. “Education and community are our immediate returns.”Photo credit: Maunalua Fishpond Heritage Center

Things would get worse—or at least weirder—before they got better. In the 1980s, the estate was owned by Ronald Rewald, an infamous con artist who made national headlines defrauding investors. “Rewald was said to have thrown some crazy parties here,” says Laura Kaakua, project manager at The Trust for Public Land. “It’s hard to fathom, but I guess he used Kanewai Spring as his own private swimming pool.” When Rewald got caught and sentenced to federal prison, his Maunalua home was abandoned—Cadillac still parked in the driveway, paintings on the walls, weeds and 15-foot trees growing unchecked in the lavish yard.

And that’s more or less how it stayed for the next 25 years—until the day in 2009 that Cramer set out with descendants of Mukai’s family, the Reeves, searching for Kanewai.

“Our group pored over all these old maps of the region, and we’d done hours and hours of oral history interviews with old-timers who grew up here, who remember the traditions and the lay of the land from when they were kids,” says Cramer. They knew there was a spring somewhere, but in the 60 or so years since the land had been privatized and developed, its exact whereabouts had been all but forgotten. “A big part of our mission is to preserve traditional knowledge and be sure it gets handed down—but there were so few places left we could point to, where you could experience that history,” he says.

“It wasn’t until I was grown up that I found out that there was a fishpond called Kanewai,” says Mukai. “And that it’s fed by this freshwater spring. It was only three generations ago, my great-grandpa and great-grandma’s generation, that this fishpond was working. They were feeding our people. That blows my mind! This knowledge was within reach.” 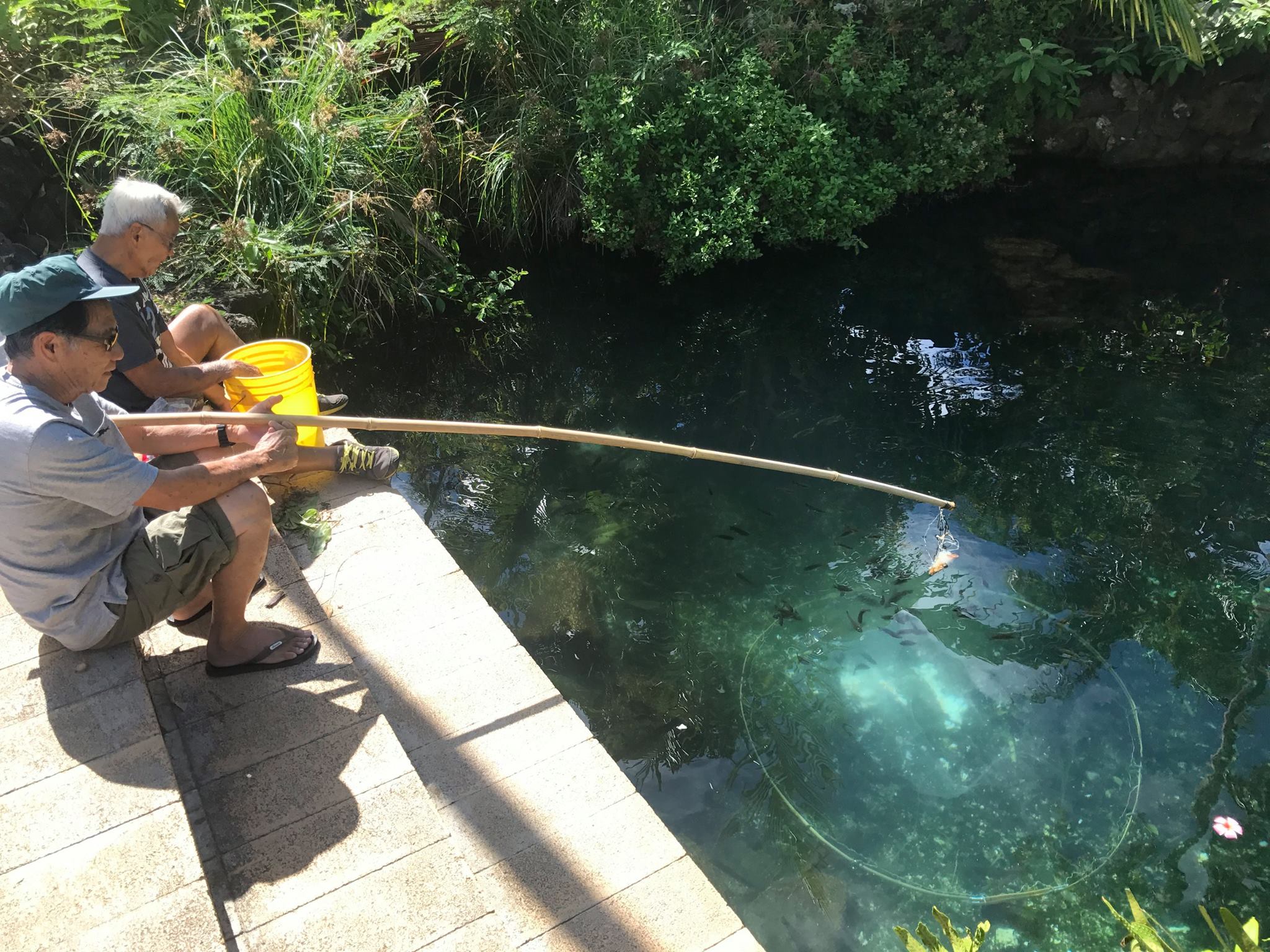 Rediscovering Kanewai Spring was no mean feat in an exclusive neighborhood typified by privacy fences and high hedges. Eventually, Cramer and his fellow spring-protectors knocked on a neighbor’s door and asked permission to peek into the old Rewald estate’s backyard, by then under ownership of a Japanese corporation. They peered over the property’s high fence and spotted what looked like a small, stagnant pond, choked with weeds and obscured by overgrown mangrove trees. It was Kanewai Spring.

“When we first found it we could barely even see it, the property was so neglected and overgrown,” says Cramer. “The water was totally black and still. There were rusty beer cans floating in it—but there was water.” The Maunalua Fishpond Heritage Center got in touch with the corporation that owned the property and explained their mission. Impressed, the owners granted the group formal permission to begin the long process of restoring one of the island’s last freshwater springs. 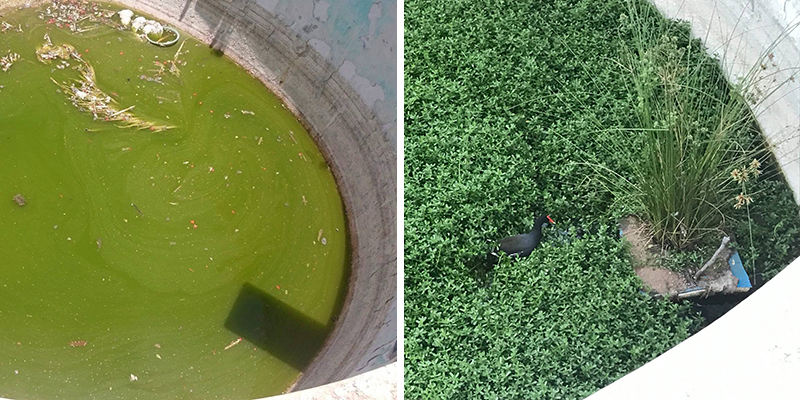 Volunteers experimented with the best way to jump-start aquatic plant colonies, and hit on a solution to float salvaged surfboards embeded with dirt and seeds. Now, the pool is a welcome rest for this endangered alae’ula.Photo credit: Maunalua Fishpond Heritage Center

“We didn’t know how to care for a spring like this when we started,” says Cramer. “We asked a lot of questions—we talked to elders, fishermen, biologists, native plant specialists, and we went through a lot of trial and error.” But they knew they were on the right track as the pool gradually turned from black, to dark brown, to light brown, to clear, clean blue.

“Our kupuna were the world’s greatest sustainability champs. They were 100% in tune with the land and ocean, to where they figured out how to maintain and harvest the fishpond without impacting the area’s ecological vitality,” says Mukai. “Now all of us, from my grandmother to my mother to me and the younger generation, we all get to re-learn our traditions.”

In 2012, Cramer met Kaakua at a community event. Knowing something about The Trust for Public Land’s reputation for helping to preserve important Hawaiian cultural sites, Cramer asked if Kaakua could help protect Kanewai Spring. “The amount of red tape in this effort was daunting,” Cramer remembers. “We’re a small community group, with no experience in high-end real estate. We needed a partner that knew how to do these types of deals, and that was The Trust for Public Land.”

It took years to raise the money to buy the estate—an effort supported by the State of Hawaii, the City of Honolulu, and hundreds of individual donors, large and small. Finally, in July of 2017, the Maunalua Fishpond Heritage Center gathered with elders, neighbors, students, donors, and elected officials to celebrate the group’s successful purchase of Kanewai Spring. 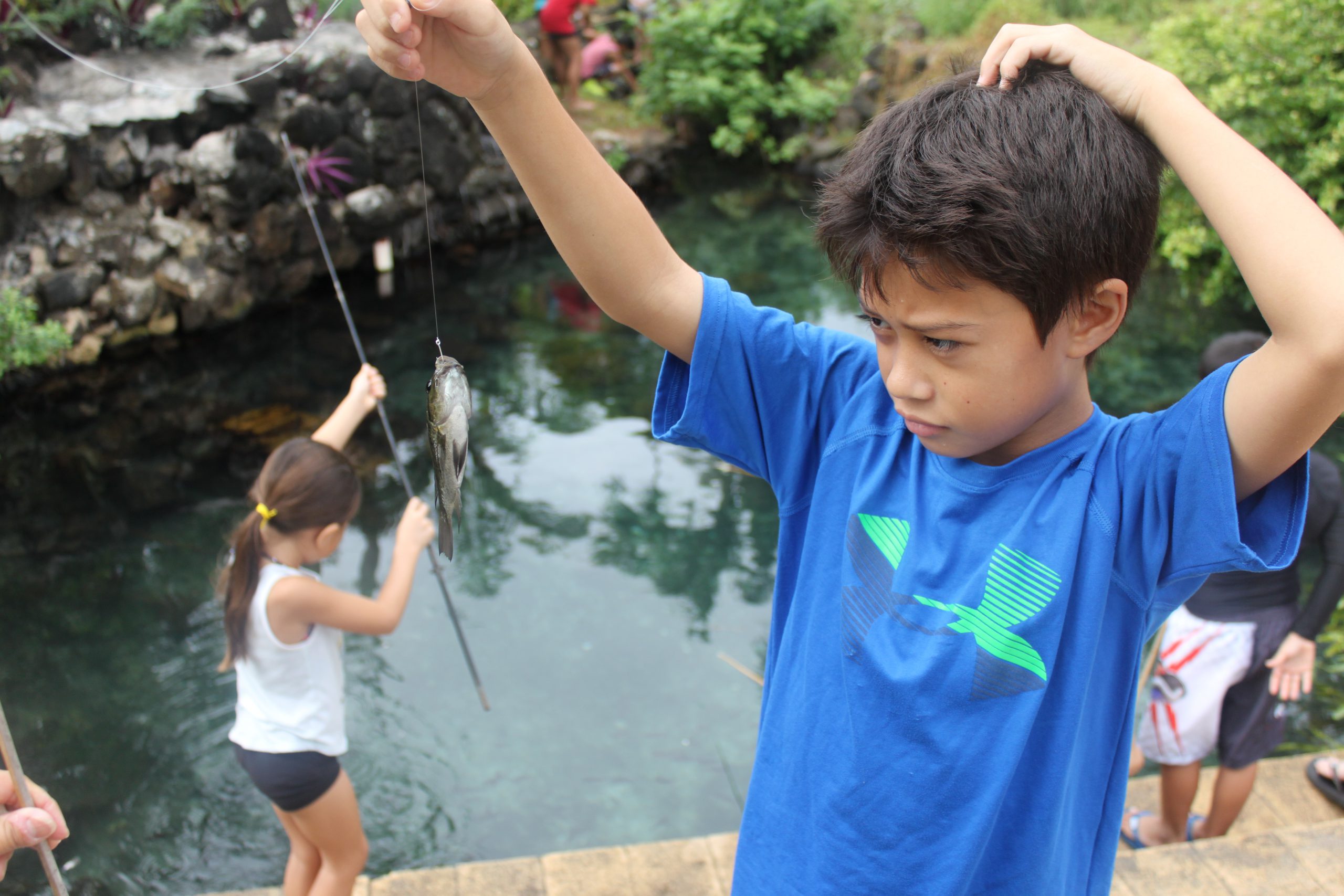 One low-cost way to eradicate invasive fish like tilapia is to declare “open season” and give every kid a fishing pole.Photo credit: The Trust for Public Land

Today, the group hosts regular volunteer work days at the site. As the community comes together to restore the spring, they’re learning about their island’s ecology and history, and passing down what they’ve learned to their children and grandchildren—just as Hawaii’s people have done for thousands of years.

“Someday, the fishpond might feed us again. Until that day comes, we’re learning so much and gaining as a community from it. Those are our most immediate returns for the restoration work,” says Mukai.

“I think of when the sailors were traveling from Hawaii to Tahiti, navigating by the stars,” he says. “Sometimes they’d have to sail through cloudy nights, but eventually the sky would clear, and they’d see that one star through the clouds. For us, Kanewai is that guiding star.”

Hawaiian diacritical markings are omitted due to online formatting.