Young hunters get a foothold at this Arkansas wildlife area
By Trust for Public Land
Published November 1, 2017
Spread the Word

Young hunters get a foothold at this Arkansas wildlife area

It’s 4 a.m. and the skies over northwest Arkansas are still inky black. This is the chilliest time of day at Frog Bayou Wildlife Management Area, 50 miles south of Fayetteville: mist crystallizes into frost on the farm fields astride the Arkansas River and a skin of ice covers puddles and potholes. Conditions are just right—for staying snug under the covers and sleeping until the sun comes up.

But the parking lot at Frog Bayou is already filling up. Alone and in pairs, people in sturdy, drab clothes are shouldering gear and hiking out into the land. Frog Bayou WMA—a patchwork of wetlands and floodplain forests—is one of the few publicly owned hunting areas managed for waterfowl in northwest Arkansas, a part of the country where people will tell you, “Hunting is a way of life.”

“If you want to be sure to get in at Frog Bayou, you have to get there right when it opens,” says Joe Quam, a sportsman who lives in Centerton, 70 miles north. He’ll leave home at 3 a.m. to claim one of those coveted spots, but he doesn’t mind the early wake-up call or the pre-dawn chill. “I just love being out, watching the whole sunrise. Plus I’m the kind of hunter that figures it’s not an adventure if you’re not suffering at least a little bit,” he says with a laugh. 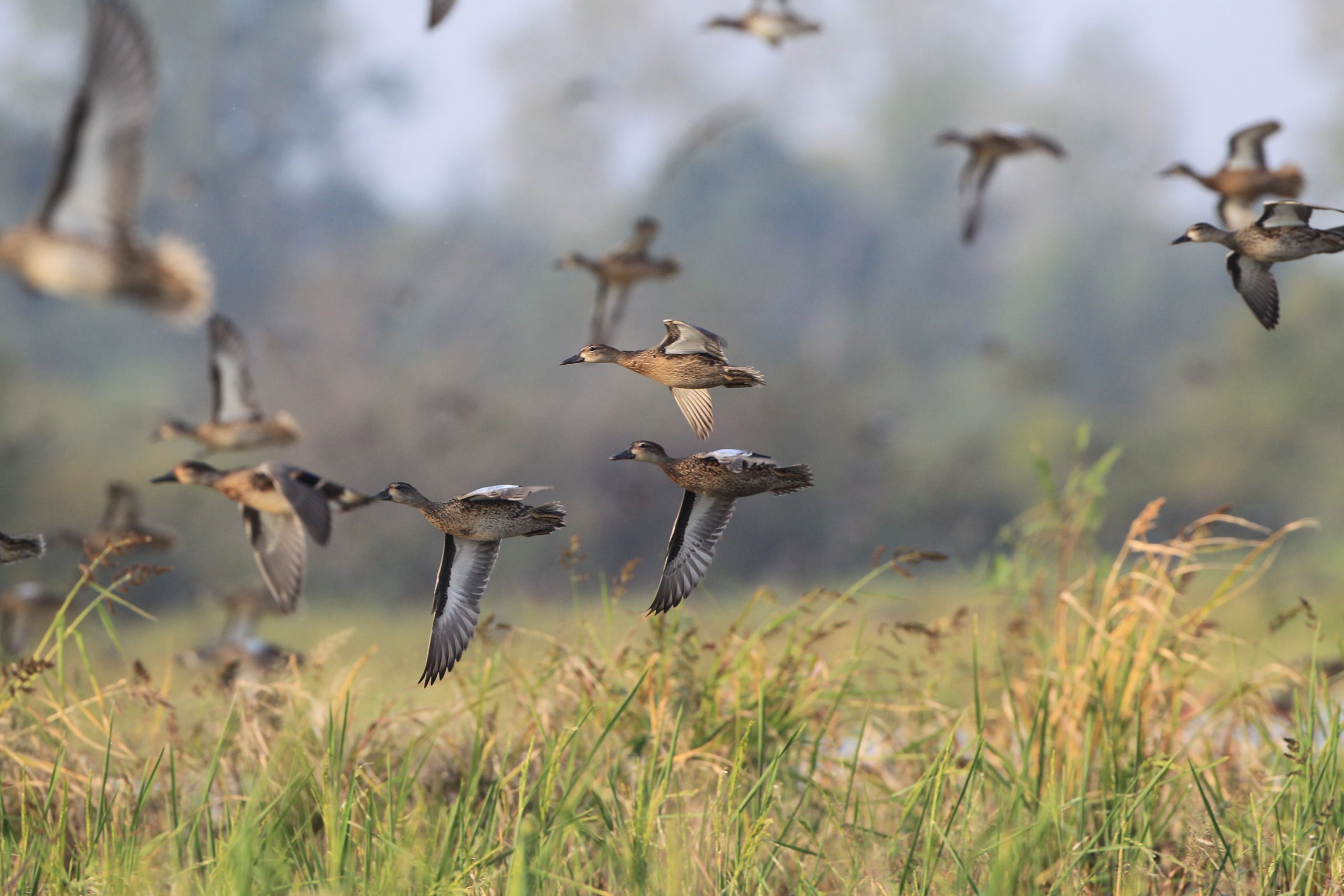 Migrating waterfowl funnel through the Arkansas each winter by the millions. Photo credit: Arkansas Game and Fish Commission

But in recent years, the Arkansas Game and Fish Commission has had a hard time accommodating all the people who want to visit Frog Bayou, which draws wildlife watchers and hunters from around the state. “The area wasn’t large enough for everyone who wanted to use it,” says Stacey Shankle at The Trust for Public Land. “At times there simply wasn’t enough space for everyone who wanted to enjoy the WMA, which is a situation nobody wants.”

So this summer, The Trust for Public Land teamed up with the Arkansas Game and Fish Commission to add another 1,390 acres to the Frog Bayou WMA, nearly tripling its size.

Frog Bayou WMA was once privately owned farmland. But following an extensive wetland restoration on the property, the Arkansas Game and Fish Commission (with support from sportsmen’s groups) acquired 812 acres here in 2004, expanding habitat for the waves of migrating waterfowl that pass through the Arkansas River Valley each winter. 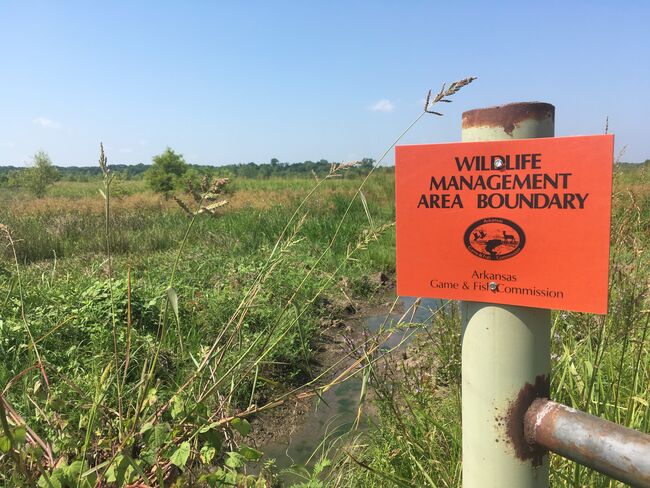 Once farmland plagued by frequent flooding, Frog Bayou WMA is now open to the public, thanks to support from sportsmen’s groups and The Trust for Public Land.Photo credit: Stacey Shankle

The recent expansion of Frog Bayou WMA was funded by the Federal Aid in Wildlife Restoration Act (also known as the Pittman-Robertson Act), a longstanding federal program that makes use of taxes on sales of firearms, ammunition, and archery equipment. “This is exactly how [the program] was designed to be used 80 years ago. The people who use the resource help pay to protect it and expand public lands to pursue their passion through their equipment purchases,” said Matt Warriner with the Arkansas Game and Fish Commission. “As a result, the wildlife benefits from increased habitat, and everyone who wishes to use the property benefits from increased access.”

That’s good news for young hunters like Quam and Robert Philpot. He’s a recent graduate of the University of Arkansas in Fayetteville and a lifelong hunter: he chose his career in real estate specifically because winters—waterfowl season in Arkansas—are slow in the business, leaving him more free time to get out and hunt. “Frog Bayou is unique in this part of the state,” says Philpot. “We’re close up to the Ozarks here. Ducks don’t really like the mountains, so it’s not as easy to find the kind of habitat they will use.”

Philpot notes that Arkansas is world-famous for waterfowl hunting, but—in part due to that good reputation—much of the prime hunting land is privately owned. Some landowners allow hunting, but they can charge access fees. 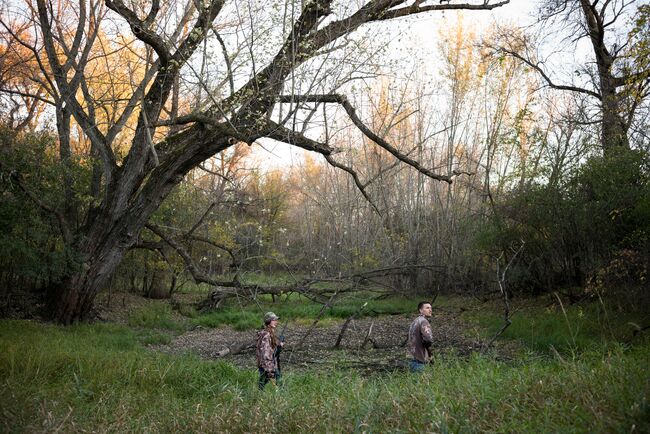 Across the country, young hunters rely on public land—and they’re speaking up for the future of the places they love.Photo credit: Andy Richter

“So especially for us young hunters, either when we’re just getting started in the sport or maybe moving away from home and hunting on our own for the first time, a place like Frog Bayou is one of the only places we can afford to go,” says Philpot. While he was in college in Fayetteville, he and his friends would drive to Frog Bayou before dawn, hike to a spot, set out their decoys, and wait for sunrise. After a few hours in the marshes “working the ducks,” they’d get back in the car and return to campus just in time for morning classes to begin.

Trips like that are possible at Frog Bayou WMA in part because it’s easily accessible from a road—meaning hunters don’t need to own a boat to get in. “Walk-in access is key for people who don’t have the money to buy all the gear and gadgets that the hunting lifestyle shows will try to sell you,” says Quam. “Access issues like that are definitely a big barrier for people getting into the sport, so I’m really excited to hear that Frog Bayou is expanding. We need more walk-in areas in this part of the state.”

Philpot and Quam say that places like Frog Bayou WMA—protected and restored with support from sportsmen’s groups—demonstrate that hunters and anglers are some of the most effective voices for conservation. As they see it, accessible public lands make it easier to recruit young hunters and instill more people with a love of the land, a bone-deep connection to nature, and a desire to conserve resources for the next generation.

As Quam puts it, “Hunting is a big way that so many people here connect with the land and nature, and that makes us a force for conservation.”