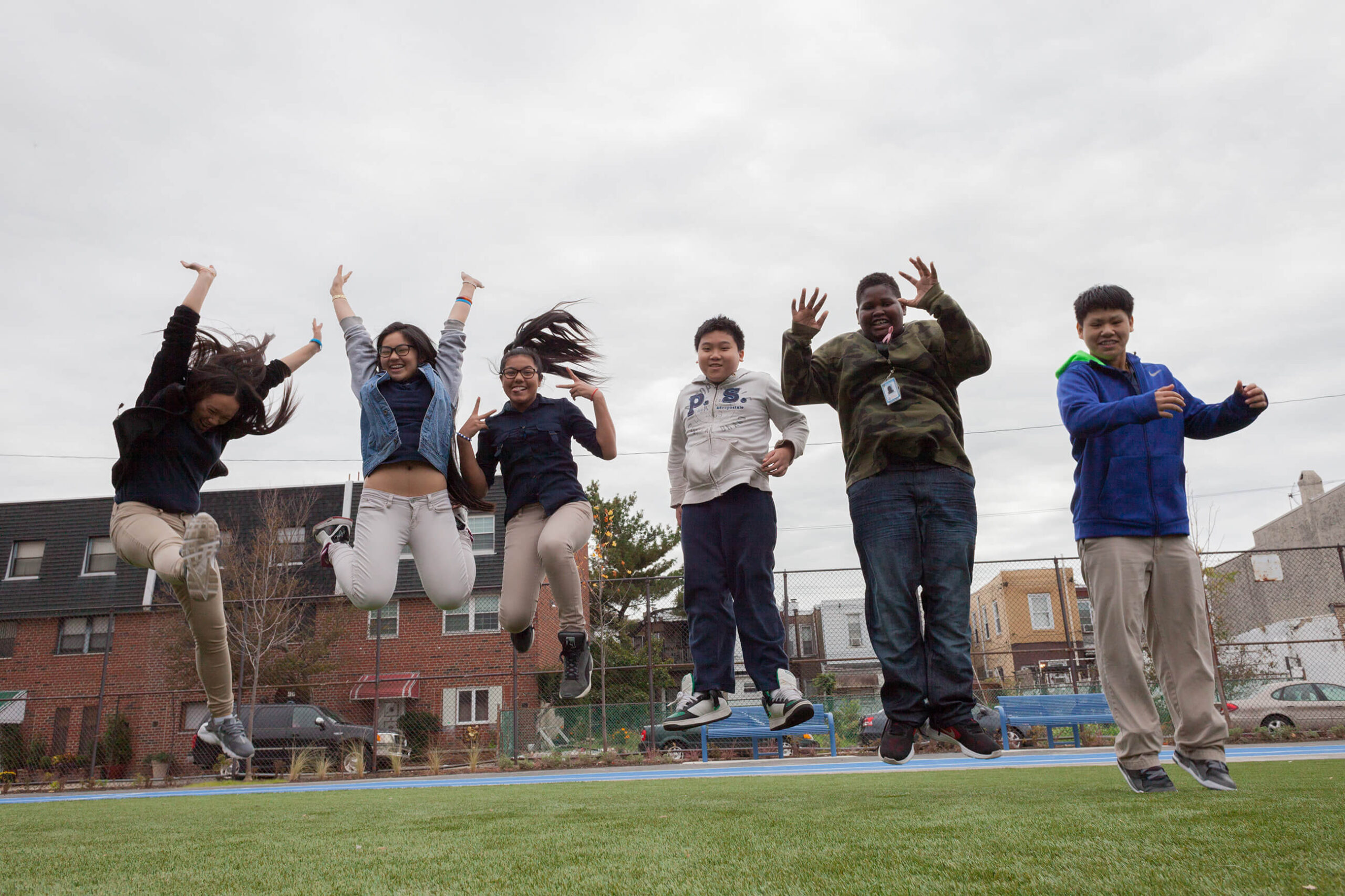 Our Community Schoolyards™ projects are a path toward improved park access, health, and climate resilience.

Imagine going to school or living in a neighborhood where you almost never glimpse a tree or garden. Then imagine living in a community where there isn’t a welcoming outdoor place to exercise, socialize, or relax within a 10-minute walk of your home.

These scenarios, sadly, are the reality for many people living in America. One hundred million people in our nation, including 28 million children, lack close-to-home parks, an amenity that confers all kinds of health, psychological and climate benefits. A simple solution exists. If we took all the asphalt-covered schoolyards across the country and renovated them into small parks—with trees, up-to-date play equipment, and perhaps a running track—we could solve the problem of park access for one fifth of all Americans.

That’s exactly what we’re striving to do with our Community Schoolyards™ projects, which have already transformed more than 300 blacktopped schoolyards into vibrant green spaces in the past two decades. The benefits don’t stop with park access, however. Our schoolyards take advantage of new kinds of infrastructure and technologies that address the stark realities of climate change, from extreme heat to flooding.

Our Community Schoolyards projects put children front and center. They get to decide what features they want to see on their school grounds, be they basketball courts, yoga circles or butterfly gardens. And many students get involved in the nitty-gritty of the landscape architecture, working alongside landscape design professionals. Through the participatory design process, students take a leadership role in making their community healthier and better equipped to adapt to the effects of climate change.

For example, in Newark, New Jersey, in 2015, we helped renovate the schoolyard at the K–8 Sussex Avenue School. Darleen Gearhart, the former principal, who is now director of mathematics for the Newark Board of Education, called the “before” version of the schoolyard “the worst surface ever.” 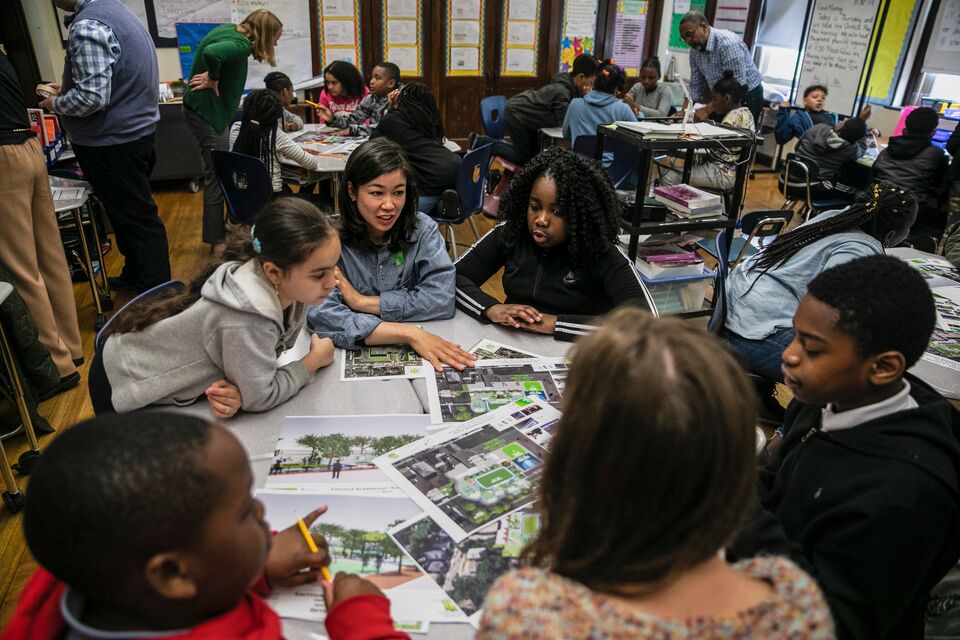 “It was basically a blacktop,” she said. “It had one basketball hoop, which wasn’t even in good shape, and it was all asphalt with a dumpster in the back. [The blacktop] was emitting heat, and if you fell down, you’d hurt yourself.”

As with all Community Schoolyards projects, students themselves helped design the new space. There is a drinking fountain for the first time and a seating area, fashioned from large blocks of granite, that functions as an outdoor classroom.

Gearhart was thrilled to watch the schoolyard’s physical transformation from asphalt expanse to welcoming green park. But she said some of the project’s most important benefits were harder to see. Average daily attendance at Sussex Avenue School climbed from 90 percent to 96 percent almost immediately after the renovation. Disciplinary actions declined, while test scores went up among the school’s 500 students, 95 percent of whom qualify for a free or reduced lunch.

“We were one of the worst schools in the district, and during the eight years I was there, we became one of the best,” she said. The state even moved Sussex Avenue off its list of at-risk schools—a change Gearhart attributes in part to the Community Schoolyards project.

“It had an emotional impact on the kids and made students feel safe,” she said. “When you create an environment where they can fall down on the turf and bounce back, it makes you feel like somebody has your back. It changes your life. To a large degree, the new schoolyard changed a lot of lives.”

We have expanded our work across the country, from our initial focus on New York City, Newark, and Philadelphia to Atlanta, Oakland, Dallas, Los Angeles, and Tacoma, Washington, among other places. We believe that every child has the right to a safe, welcoming, beautiful landscape in which to enjoy recess and that every citizen has the right to reach a park within a 10-minute walk.

Since education is a critical path for achieving the American Dream, shouldn’t schools in the neighborhoods with the greatest need be the ones that offer the most resources? In some states, such as New Jersey, equity-based funding provides capital resources to schools located in communities with the highest concentration of poverty. This policy has resulted in brand new school buildings in communities like Camden, Patterson, and Passaic. 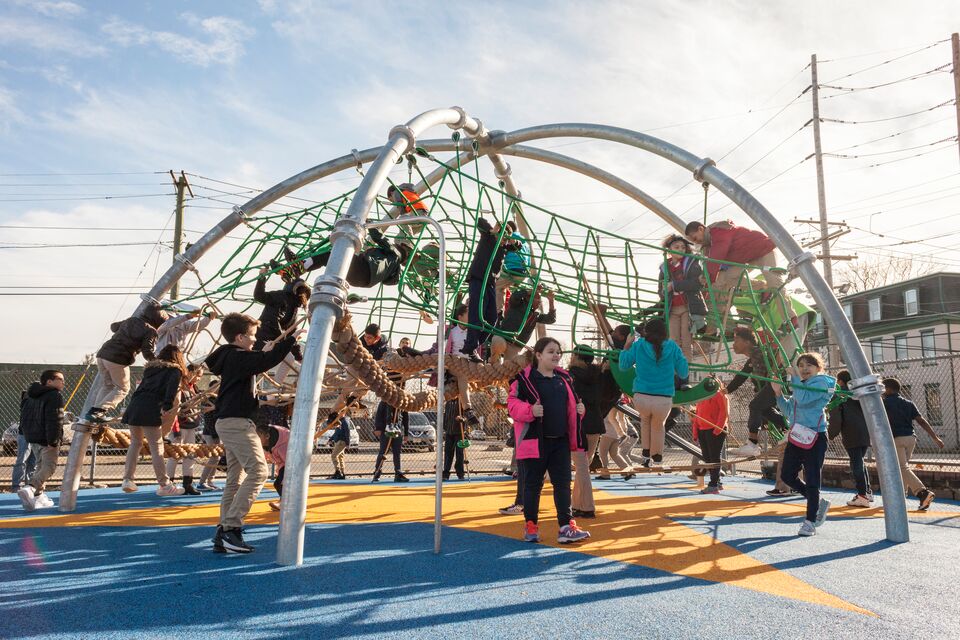 Unfortunately, the New Jersey example is rare. Many states rely on a tax-based education funding formula that reinforces systems of inequity. For instance, in an affluent community, with a wealthy tax base, the public schools will offer plenty of extra-curricular activities, sparkling science labs and nature-rich, inviting schoolyards. Likewise, schools in low-income communities have a shallow tax-base and therefore have very few dollars to allocate to education.

In these communities, schools are struggling to make ends meet, often with crumbling buildings, deficient programming and barren, prison-like schoolyards. This needs to change. Together, we can tap the incredible resource embodied by the nation’s schoolyards to bring the great outdoors to millions of Americans who currently lack its life-affirming, health-boosting benefits.