Auburn Avenue—known colloquially as “Sweet Auburn”—is the birthplace of Martin Luther King Jr. and where he spent the first 12 years of his life. Trust for Public Land helped preserve the area’s architecture and character, connecting visitors to the site more deeply to his legacy.

Martin Luther King Jr. was once just a kid—a bright, studious boy, but not too serious to chase his sisters around the backyard of the family home, a tidy Victorian at 501 Auburn Avenue in Atlanta. Before he became a leader of the civil rights movement, he shared a bedroom with his younger brother, and changed into clean clothes before he sat down to dinner each night at the big dining room table. Before he was a legend, King spent much of his childhood in the homes, churches, and streets of Atlanta’s Sweet Auburn neighborhood, which defied the odds of the Jim Crow South to become one of the most prosperous black communities in America.

“Sweet Auburn was the richest street in Black America,” says Georgia congressman John Lewis, who worked alongside Dr. King during the height of the 1960s civil rights movement, and visited the neighborhood often. “A melting pot of civil rights leaders, activists, well known artists, singers and entertainers would all gather in this thriving neighborhood. You knew when you walked the streets, you were walking through history. I felt really blessed to meet in the offices of MLK Jr. to witness young people that were inspired like I was amongst the great civil rights activists during that time. The very essence of this neighborhood tells the story of the struggle of the civil rights movement.” 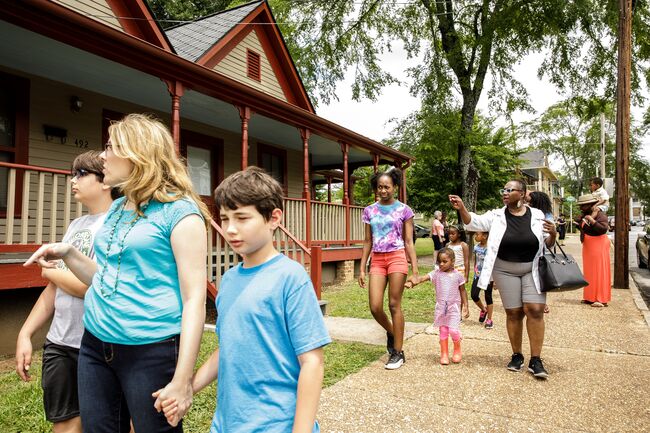 The area around Dr. King’s birth home has been preserved as it was when he was a child in the 1930s. Photo: Christopher T. Martin

These glimpses into King’s early life and the legacy of his work are now preserved as part of the Martin Luther King Jr. National Historical Park, which covers several city blocks near downtown Atlanta. Since 1980, The Trust for Public Land has helped the National Park Service save and restore many of the neighborhood’s buildings. Now, it’s is one of Atlanta’s most popular destinations, welcoming roughly a million visitors a year to visit the home where Dr. King was born in 1929, the church where he preached his first sermon, and the tomb where he’s buried.

Niya Randall teaches second grade at a nearby school. Every year, she brings her students to the tour the King family’s home and the neighborhood where he grew up, which is preserved to recall the way it looked in the 1930s. “School kids learn about Dr. King’s life and work everywhere in America, but we’re fortunate in Atlanta to be able to go and see these parts of his life up-close,” she says. The students spend weeks studying the civil rights movement in class, but Randall says coming to see King’s home brings the lessons of the era to life—especially the idea that positive change depends on people choosing to take action. “When you walk down the streets he walked down, and pass the houses he passed, even a seven-year-old gets it: Martin Luther King Jr. had a childhood like anyone else, and look what he accomplished.” 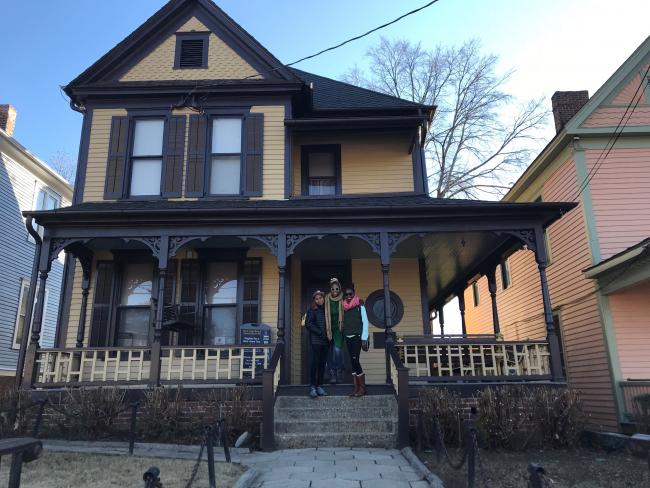 Niya Randall makes sure all of her second grade students experience the Martin Luther King Jr. National Historic Park. Her own kids are teenagers, and they grew up visiting the site frequently. “We learn something new every time we come back,” she says. Photo: Niya Randall

Few people understand the power of that moment of realization more than Clark Moore. He’s been a park ranger at the national historic park since 1985—“Back when this neighborhood was pretty run down, struggling with crime and drugs, with some of the homes going into disrepair,” he remembers. In his 33 years of service at the park, Moore has helped bring history to life, restoring old homes and developing the signs, brochures, and tours that tell the neighborhood’s story. Moore has gotten to know celebrities, relatives of Dr. King, and veterans of the civil rights movement, who visit to pay respects to Dr. King’s legacy.

Though preservation is a focus of his work, Moore says that the national historic park isn’t just about remembering the past. It’s also a magnet for modern civil rights activists, a meaningful place to gather, teach, and learn. “Dr. Bernice King—who’s a niece to Martin Luther King Jr., holds a nonviolence workshop at the historic firehouse around the corner from his birth home,” Moore says. “We have some kind of gathering or demonstration down here all the time.”

Representative Lewis, who has supported the effort to expand the national historic park during his 30-year tenure in Congress, believes that everyone, no matter their background or politics, can benefit from visiting Dr. King’s childhood home. “I’ve supported the creation and expansion of a park in Dr. King’s honor because this piece of history must be available for all to experience,” he says. “People should come and see where Dr. King lived, grew up, worked, preached and talked about the good news of freedom and liberation. It is important that people of all ages and from all backgrounds have an opportunity to visit and observe the mecca for African Americans during the civil rights movement, to see Ebenezer Church and see where Dr. King and his father preached great sermons, the church where he was baptized and married, and where his funeral was held in 1968.” 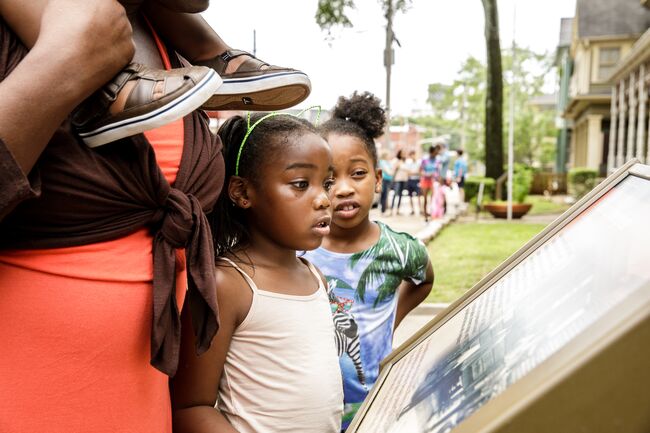 “When you walk down the streets he walked down, and pass the houses he passed, even a seven-year-old gets it: Martin Luther King Jr. had a childhood like anyone else, and look what he accomplished.” Photo: Christopher T. Martin

“This is an uncommon kind of national park,” says Moore, because people still live in most of the homes in the neighborhood—some have been here since Martin Luther King Jr.’s time. Moore’s proud to have become a part of the close-knit Sweet Auburn community: he and his colleagues are on hand to help elderly residents change lightbulbs or fetch groceries, and invited to family gatherings and celebrations.“We look out for each other here. One thing I’ve really come to understand over the years, through meeting his relatives and studying his life, is just how generous, tireless, and giving Dr. King was,” Moore says. “We’re just trying to carry that spirit forward.”