More than just a safe and inviting place where kids can be kids and residents can gather and exercise, the community-designed park has reengaged residents. It honors the rich and long history of the area’s Indigenous people and affirms for everyone who lives here that their past, present, and future deserve recognition and investment.

Situated near the confluence of the Sprague and Williamson Rivers in southern Oregon, in a small valley surrounded by forested mountains, the rural community of Chiloquin would seem to have ample resources for outdoor recreation. But this capital of the Klamath Tribes, who are native to the area and account for a major portion of the population, is nearly landlocked. Residents of Chiloquin today have little access to surrounding areas that, for thousands of years, sustained and were stewarded by the Klamath Tribes’ ancestors. Forced to cede millions of acres to the U.S. government in the 19th Century, the Klamath Tribes and the entire local Chiloquin community have struggled economically since the area’s timber industry declined in the late 1980s. Today, there are few outdoor gathering places, especially for children. And elements of the rich Klamath culture in this area have faded.

But with the recent re-opening of the Chiloquin Elementary schoolyard, area children have a long-awaited, high-quality place to play and gather, and residents have a place to learn about and honor the Klamath Tribes’ history and culture. Once a barren space with outdated play equipment, the newly renovated, 8-acre schoolyard is filled with recreational amenities like a covered basketball court, walking paths, a restored meadow, and an outdoor classroom. The space was designed with the help of students and community members during a two-year participatory design process. The schoolyard now doubles as a community park, available to residents after school and on weekends.

Art Ochoa, a tribal member and retired educator, was among the community leaders who partnered with TPL on this project. He says the new schoolyard filled a void in a community long beset by unemployment and poverty. That void was all the more acute given that Chiloquin’s population skews young, with nearly a third of residents under the age of 18, compared with 22 percent nationally. About half of the elementary school’s 180 students belong to the Klamath Tribes.

“In Chiloquin, there’s an open field right in the middle of town, but that’s where young adults who might be making unhealthy and unwise choices hang out,” Ochoa says. “So people don’t feel safe letting their kids go there and play. Having a place to go that’s safe has a tremendous impact on the community, and people appreciate that.”

The Klamath Tribal Council asked if TPL would consider partnering on a new schoolyard, and not long after, Kovalik, the council, and the Klamath County School District kicked off their partnership. Trust for Public Land spearheaded the project by assembling a coalition of a dozen organizations and agencies, identifying funding streams, and shepherding the renovation to completion despite extraordinary obstacles ranging from the COVID-19 pandemic to wildfires that threatened Chiloquin in 2020.

In September 2020, Chiloquin Elementary served as a distribution center for food, water, and supplies donated by the Klamath Tribes during the Two Four Two wildfire. That fire devastated the region, forcing more than 600 households to evacuate. School staff and volunteers handed out food and helped neighbors extinguish flames. The elementary school was later recognized by U.S. Senator Jeff Merkley of Oregon, who presented administrators with a flag that had flown over the nation’s capitol.

“The Two For Two wildfire brought out the Chiloquin community’s spirit of unity, and it was inspiring to see their resilience and commitment to come together and provide for each other in that time of need,” says Kristin Kovalik, Oregon state director at Trust for Public Land. “We’re so proud to have worked with the Klamath Tribes, school district, and broader community and hope this can serve as a model for other communities.” 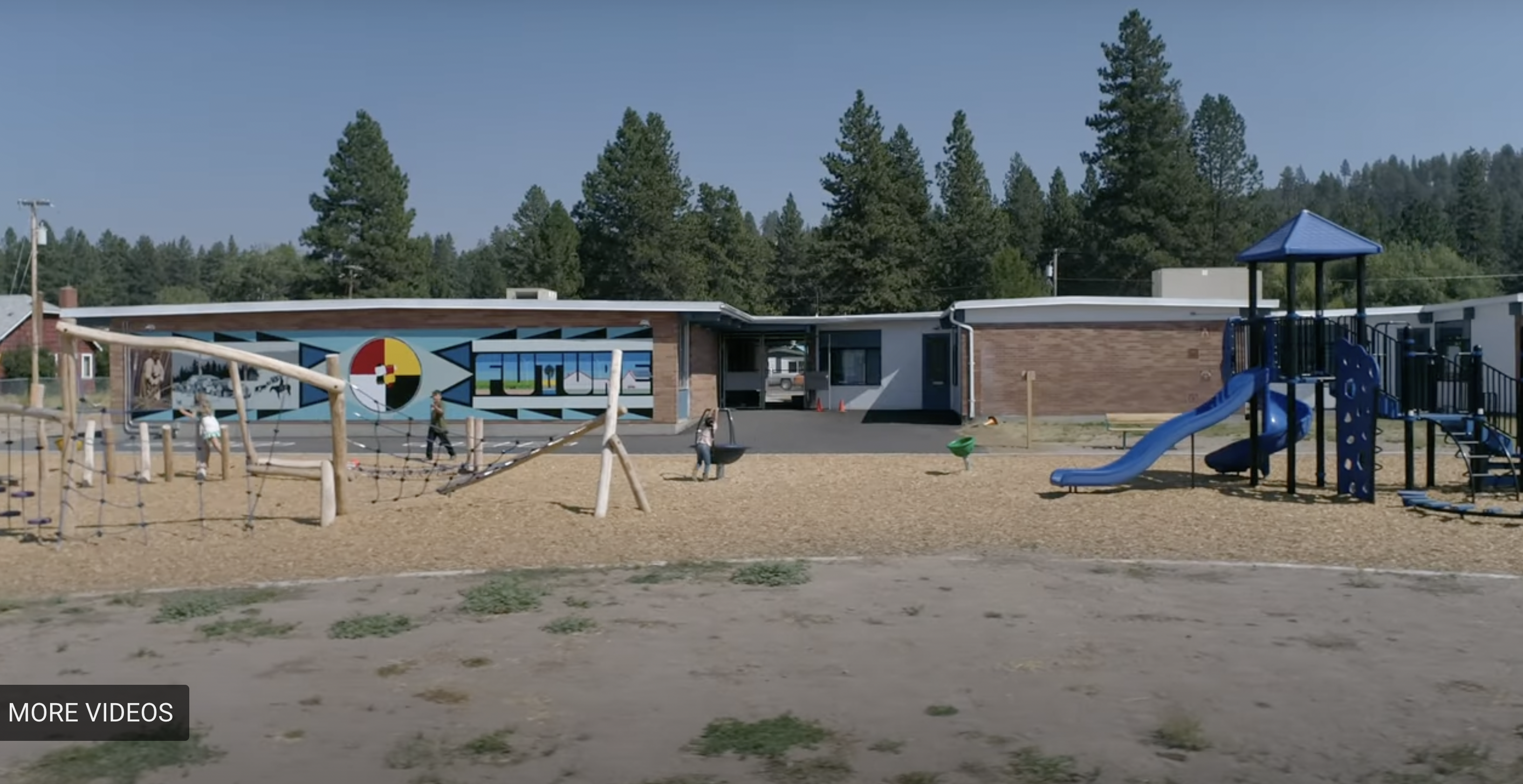 Ochoa says that over the years, especially after the tribe lost its recognition in the mid-20th Century, the connection to tribal history eroded.

“There was a lot of culture lost, a lot of language, a lot of understanding among children about who they were,” he explains. “And I think this schoolyard is going to help both Native and non-Native kids understand the development and history of the Klamath Tribes a little better. And with that understanding, sometimes barriers are broken down.”

To celebrate the tribe’s heritage and to honor its long history in the area, the new schoolyard features plant species such as chokecherry, huckleberry, ipos (a perennial herb), native plum, and Indian celery, which hold special significance for the tribe. There are signs —as well as audio recordings in both English and the Klamath language—in the schoolyard that explain the harvest cycles, months when various plants were traditionally gathered, and when animals like elk and deer were hunted.

There are also signs describing the dominant tree species of the region (ponderosa pine and lodgepole pine), Chiloquin’s history as a once-thriving mill town, and the historic importance of wocus, the seed of the yellow pond-lily, in the Klamath peoples’ diet.

In just two months since the schoolyard’s opening, it has already made a dramatic difference in the life of the school and community. Janelle Emard, vice principal of Chiloquin Elementary, says that behavior referrals—reports of conflicts or disruptive behavior—especially during recess, have plummeted.

“This used to be one of the places where we received the most referrals, but now, all the kids have been playing and interacting with each other in very positive ways,” Emard shares, crediting the change to the collaborative and thoughtful process for all the options that were included in the schoolyard. She adds: “The kids are loving it.” 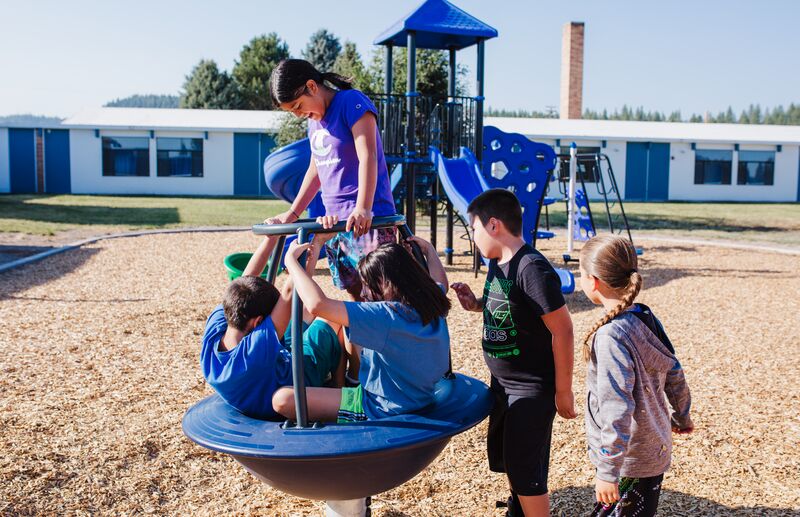 For Ochoa, who was hired on contract to serve as the project’s community coordinator, the new schoolyard is about more than basketball courts or paths. It’s a hopeful statement about a community that needed to be recognized in positive ways. “Chiloquin historically was a place that you didn’t really want to go,” observes Ochoa, who was born and raised there and still considers Chiloquin home despite living some 60 miles away.

“But this schoolyard is changing that,” he adds. “Other building principals in the Klamath County School District are talking about it. Some of them have actually seen it, and they are really impressed. So I think it gives community members the opportunity to put their heads on their shoulders, and say, ‘We are as good as anyone.’” 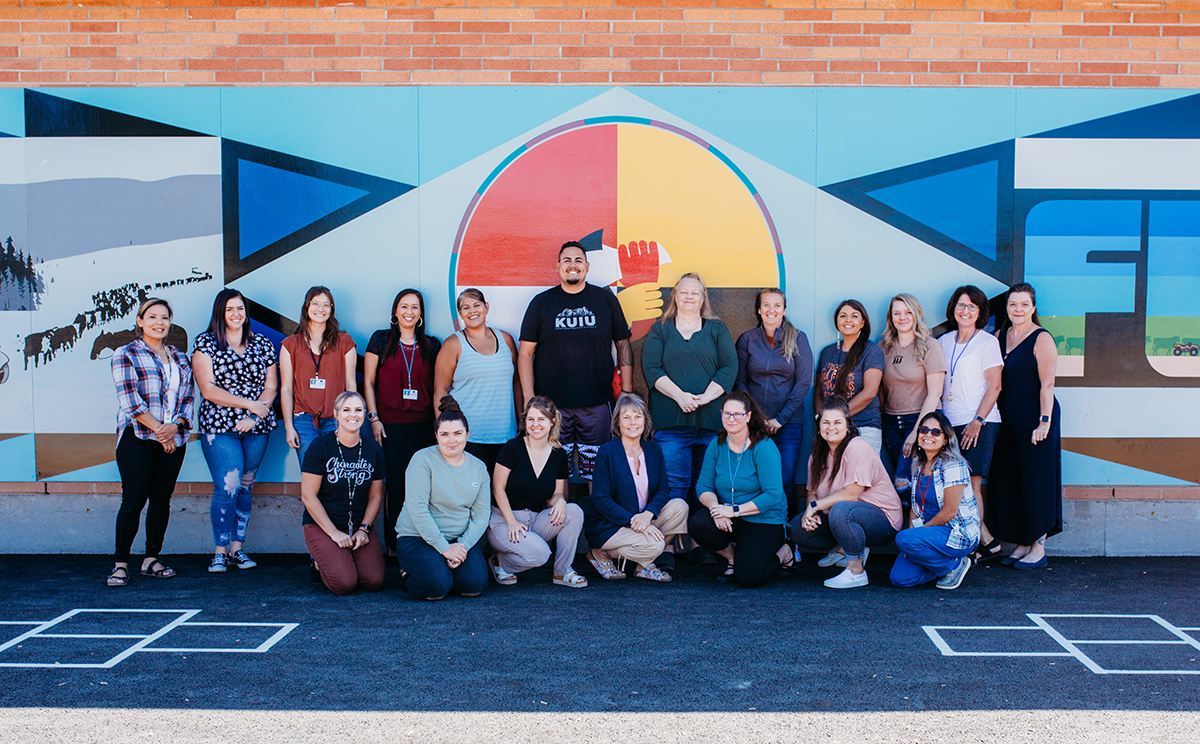 In rural Klamath County Oregon, a new schoolyard is more than a healthy place for nature play. It also honors the community’s history and culture. Become a member and help us connect everyone to the outdoors.

Support Our Work in Oregon