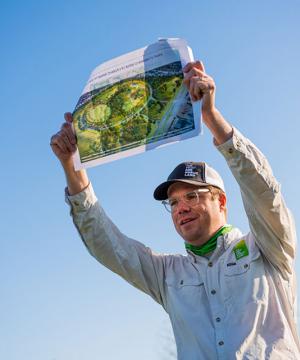 As our Texas state director, Robert Kent works to ensure every Texan is able to experience the health, climate, equity, and community benefits of close-to-home access to parks and nature. Since joining the organization in 2014, Robert and his colleagues in Texas have developed city- and regional-scale conservation plans, acquired hundreds of acres of land for new parks and nature preserves, developed numerous community-driven park master plans, advocated for hundreds of millions of dollars in new public funding for parks and conservation, and expanded park access to hundreds of thousands of Texans. Prior to working for us, Robert served as the policy director for the North Texas Commission. Robert received his BA from Baylor University, where he studied economics and environmental science, and his MSc from the University of Glasgow, where he studied international economic development.