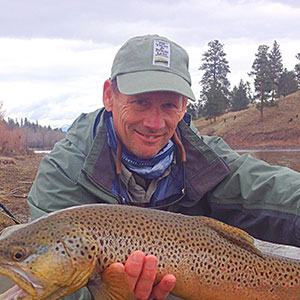 Larry is retired after a 30-year career in high tech. He worked with many of the creators of the networked computer industry in Silicon Valley, including Xerox and Sun Microsystems, as an engineer and executive. In 1990 he co-founded and became Chairman and CEO of Remedy Corporation, which became the world leader in corporate help desk applications and a public company in 1995. Larry retired in 2002 following the acquisition of Remedy. Since then Larry has focused on family, philanthropy, fly fishing, and other sports interests. Larry and his wife Pamela live in Palo Alto, CA, and enjoy having their daughters close by in San Francisco. They spend almost half of their summers in the Swan Valley of Montana and have been a supporter of The Trust for Public Land’s work with the Montana Legacy Project since 2006. Larry recently joined the Board of Directors of the Swan Ecosystem Center, and he is Board Member Emeritus for Special Olympics, an organization he has been with in N. CA & NV for over 10 years. Larry has two degrees from Stanford University.