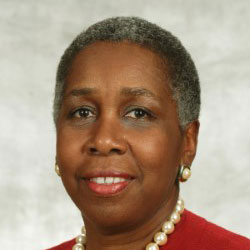 Elizabeth Clark-Lewis, PhD is Professor of History and Public History Program Director at Howard University. The former Director of Graduate Studies was awarded a Ford Foundation Graduate Research Fellowship and a Smithsonian Institution Postdoctoral Research Fellowship. Her academic appointments before joining the faculty at Howard University include Banneker Professor, George Washington University; Visiting Professor, Pennsylvania State University; and Professor, Northern Virginia Community College. Professor Clark-Lewis is an active member of the academic and Public History community, serving on many boards that work to encourage the general public’s interest in history. Service to the academic community includes election to the Executive Board – Organization of American Historians, Board of Directors–National Council on Public History and National President–Association of Black Women Historians. Other service includes membership on the: Executive Board, African American Experience Fund of the National Park Foundation; Landmarks Committee–National Park Service; and, Executive Council–Association for the Study of African American Life and History. She completed her BA and MA at Howard University and holds a doctorate from the University of Maryland.

A founder of the Afro-American Historical and Genealogical Association, Clark-Lewis has published extensively in the areas of African American and Public History. Among her publications are Keep It Locked: 106 Tributes to A J Calloway From the Mecca (2015); Synergy: Public History At Howard University (2011); First Freed: Emancipation in the District of Columbia (2003); Living In, Living Out: African American Women and Migration to Washington, DC (1994); and, This Work Had A End: The Transition From Live-in to Day Work (1985). She co-authored Emerging Voices and Paradigms: Black Women Scholarship Today (2007) and Northern Virginia Community College: An Oral History (1987). With Stanley Nelson she co-produced the PBS documentary Freedom Bags, a documentary recently featured at the Big Sky Documentary Film Festival, which won the Oscar Micheaux Award from the Black Filmmakers Hall of Fame.