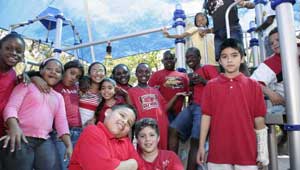 Construction of interstate highways in the 1950s and 1960s devastated Miami's historic Overtown neighborhood. Today the once-thriving African American community is experiencing a revival, shaped in part by planned new parks and open space. In support of this effort, TPL created the Overtown Greenprint to strategically guide the development of new parks, greenways, community gardens, and playgrounds. In 2002, TPL purchased two vacant lots adjacent to a YWCA  for the first new playground, which the YWCA will maintain and operate under lease from Miami-Dade County. The community helped to design the playground, which opened in 2007. Funding for the project has come from the county, the John S. and James L. Knight Foundation, the MetLife Foundation, and Washington Mutual Bank.