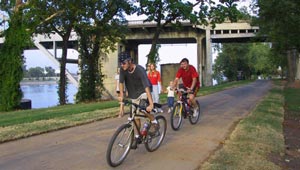 Also known as the Arkansas River Trail, the Millennium Trail already extends more than 11 miles and has become an important recreational resource for both Little Rock and North Little Rock, just across the river. In March 2005, TPL was pleased to help add a crucial segment to the trail: more than a half mile of abandoned rail corridor that connects the trail to downtown Little Rock’s historic Riverfront Park and the dramatic new Clinton Presidential Center and Park, where trail users can now cross the river on a former Rock Island Line railroad bridge. Eventually the Millennium Trail will extend 14.5 miles on both sides of the river, from Little Rock International Airport in the east to Pinnacle Mountain State Park in the west.