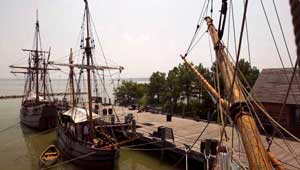 May 2007 marked the 400th anniversary of the Jamestown, Virginia colony—the first permanent English settlement in the New World. Today, the settlement is recalled in two historic parks that protect the ruins of the fort and village and offer a living-history interpretation of the period. For years, James City County wanted to protect 202 acres of highly developable land near the settlement, a desire that intensified as the 400th anniversary year approached. With frontage on the James River and Powhatan Creek, the land includes a campground, marina, and part of a Revolutionary War battle site. Working in partnership with the county TPL acquired the land in December 2006. The new county park offers public recreation while buffering the adjoining historic land from development.